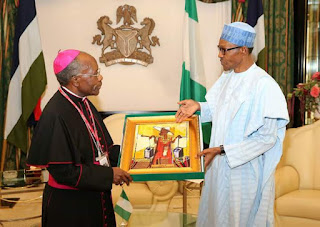 President Muhammadu Buhari has commended the contribution of Pope Francis and the Holy See to global peace, describing it as "active and relentless."

Speaking while receiving Archbishop Augustine Kasujja, Apostolic Nuncio (Ambassador of the Holy See) in a farewell visit at State House, Abuja, Thursday, the President said the effort of the Pope for peace, especially in Syria, is inspiring and impressive. 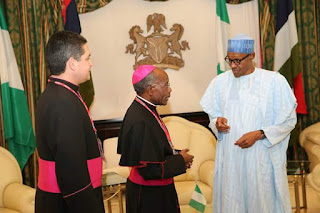 "Please convey our gratitude to the Pope. We thank the Vatican for supporting Nigeria's efforts. You have spent over six years here. We hope you will keep in touch,” President Buhari said.

Archbishop Kasujja extolled what he called "the courage of Nigerians," especially as exhibited by the unbowed heads of people in the North-east, despite the devastation visited on them by years of insurgency. He  added that he visited all parts of the country in his almost seven years’ stay.

“If you permit me, I will love to be an ambassador of Nigeria wherever I go," he declared.

The Apostolic Nuncio said he found Nigeria fascinating, and his tour of duty quite fulfilling and rewarding.