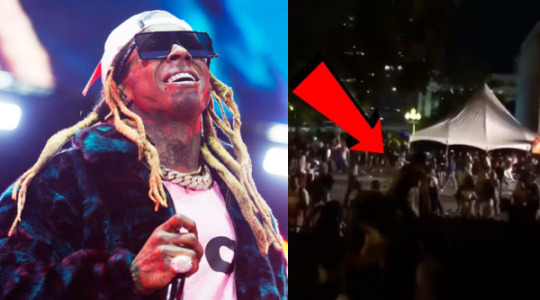 Superstar rapper, Lil Wayne was reportedly rushed off stage during his A3C performance as screams were heard in the crowd.

Lil Wayne was ushered off stage by his security as crowds began to stampede in fear, with some claiming there were gunshots and others blaming the madness on fights. It was gathered that the  uneasy crowd were able to break through metal security barriers while authorities called for an evacuation.

Bulletproof Coffee – How to Make It (…
I’m feeling rushed today
Zoro – Giddem ft. Lil Kesh
Stop Feeling Sorry For Yourself And B…
Facebook Is Playing Hide And Seek — A…

Confirming the pandemonium during his A3C performance, Lil Wayne tweeted;

Tweets from some concert goers reads;

“Everybody started ducking while Lil Wayne was onstage like someone in the crowd had a gun,” wrote one fan in the crowd. “Before the rumors come out they ain’t shoot up @A3C the fought it up,” stated another.

However the Atlanta police say that they’ve been unable to locate any evidence to support claims that shots were fired. No serious injuries have been reported.

A message from the festival organizers confirms an “altercation” ended Wayne’s performance early. “This was a very unfortunate way to end what has been an otherwise amazing week of music, friendships and connections,” a tweet reads. Investigations continue.

The A3C Festival took place this past weekend at the Georgia Freight Depot, in Atlanta, Georgia. The massive hip-hop event featured Wu-Tang Clan and Lil Wayne as headliners, with a long list of star talent behind them on the catalo

20 Quotes To Reduce Stress When You Have An Invisible Illness