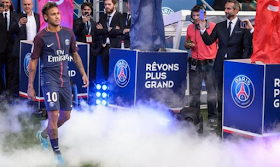 The Brazil international made the 222m euro (£200m) move to the French Club in August after buying out his contract.

Barcelona now want him to return a renewal bonus he was paid when he signed a new five-year deal just nine months before forcing through the move.

"The club demands the player return the already paid sum as he has not completed his contract," it said.

As well as the 8.5m euro bonus, the club wants "an additional 10% because of delayed payment".

The statement continued: "The club also requests Paris St-Germain take on responsibility for the payment of these fees if the player cannot do so himself."

Paris St-Germain later responded to say they were "surprised" by Barcelona's statement, adding: "The club repeats that, along with Neymar Jr, it strictly respected all applicable laws and rules and can only regret, once again, the attitude of FC Barcelona."

The lawsuit was submitted on 11 August to the Labour Tribunal in Barcelona.

Following the transfer, Barcelona announced the club was withholding a further 26m euro (£23m) loyalty bonus from the player.

Neymar criticised the directors of the club on Sunday after scoring twice on his home debut for PSG in a 6-2 win over Toulouse.

"I spent four beautiful years there and parted happy," said the 25-year-old. "But with [the board], no.

"For me, they are not the people who should be there, for the direction of Barca. Barca deserve much better." 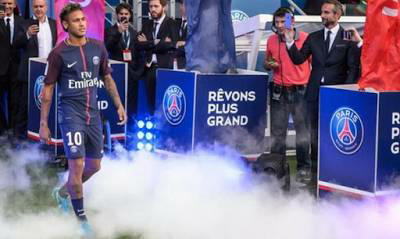