I Made The First Move - J-Lo Talks Dating Alex Rodriguez

Jennifer Lopez swung by The Ellen DeGeneres Show and spilled the details about how she'd first kicked off her current romance with Alex Rodriguez.J-Lo had spotted A-Rod while having lunch out - a Cobb salad and tortilla soup - and 'for some reason, I just felt like tapping him on the shoulder and saying: "Hi.

"'A dinner date followed soon after, but that appears to havebeen the extent of it that evening, as J-Lo vamped to Ellen: 'Mama don't sleep over on the first date!'The 47-year-old had arrived on Ellen's stage wearing a snakeskin-patterned miniskirt that allowed her to showcase her chiseled dancer's legs

.She recalled that during their first conversation after she tapped A-Rod's shoulder, 'I was like: "What are you doing inLA?" He said: "I’m – I live out here now." And he goes:"What about you?" I go: "I’ve always lived out here, you know, for the past -"'.

Turning to Ellen's studio audience, J-Lo said of all this minutiae: 'This is so - you really wanna year this?' but both the hostess and the crowd were quite emphatic they did.More gossip emerged when she explained: that 'he was like: “We should hang out.”

. Okay."'Ellen seized on the fact: 'He had your number already?' andwhen J-Lo replied: 'From years ago, yeah,' the talk-show hostess said: 'Oh. I see.

Let's back up to then.'The Jenny From The Block singer assured Ellen, however, that giving A-Rod her number then 'wasn't like that,' and that 'it was a referral for something else.'

Yet once A-Rod and J-Lo were chatting other up after her salad and soup, 'he texted me. He said: "Let’s go out to dinner." I said: "Okay."

'When Ellen mischievously asked what they'd had - 'Salad, again?' - a good-humored J-Lo said: 'I don't remember what we had for dinner, but we had a nice dinner.'

After J-Lo had swatted off Ellen's speculation about a possible 'sleepover,' the Metairie native quizzed the pop diva: 'So, maybe you two will have children.''Oh, my God!' the Selena star cried out.

'We're just having a nice time right now - ' just before a man dressed as A-Rod in uniform as a New York Yankee burst from a wooden chest between the two women, prompting J-Lo to shriek and laugh.'This a**hole’s been in there the whole time?' she yelped to Ellen, who was beside herself giggling.

'The whole time? Are you kidding me? In a Yankee’s uniform?'J-Lo and A-Rod have been dating since at least last month,and they've been seen getting cozy in L.A., New York, the Bahamas, the Dominican Republic and Miami 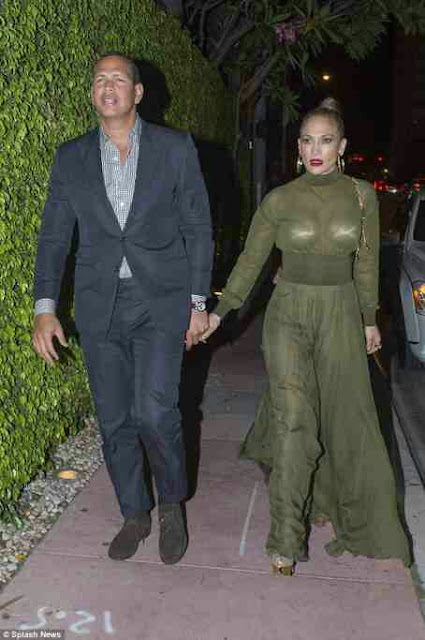 I Made The First Move - J-Lo Talks Dating Alex Rodriguez