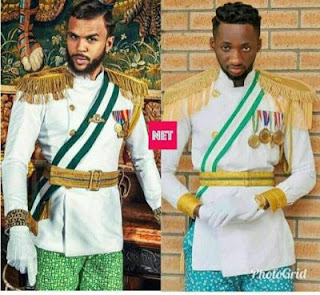 It didn’t take long for Nigerians on social media, Twitter in particular to wonder who this person was. Val Obi , an upcoming singer stopped by NET TV to explain the rationale behind that statement.

How To Get Health Insurance Without A…
Shen Men Piercing: Does it work for A…
GE Versana Premier and GE Logiq P9 – …
Online Massage Therapy Courses, are y…
Karen Wiesner: I Have Dreamed a Littl…
Val Obil made further boasted that International music star, Jidenna, copied his style in an interview.
‘I was at Abraka, Delta State with two of my friends and composed a song called Isoko in 2015, I didn’t have the money to produce the song then, I then put out the artwork on Twitter and Whatsapp generated views online, I am sure Jidenna or his management saw it and took it from there.Fast forward to 2017, I noticed that Jidenna uploaded a photo on October 1 having striking similarities with what I wore, please tell me what is the difference? I really look up to Jidenna as a musician, but creativity should actually be acknowledged and that was why I had to speak out,’ Val Obil stated.
Despite the fact this particular photo of Jidenna has been out for nearly two years, Obi inistited that there’s no way he could have had that particular costume if he didn’t take it from him. He however declares that this was not a publicity stunt and just wants people to know the truth.
What's your take on this?...