With plenty of new technological innovations being released this year, there’s no doubt that 2017 is going to be a year of big changes when it comes to Technology in the Healthcare industry. In this article, we sum up our predictions for the main rising healthcare tech trends you need to be aware of so you can make the most of everything 2017 has to offer – and avoid any potential pitfalls.

1) An Increase in Cybercrime

According to a Black Book survey, more than 95% of hospitals with over 200 beds say that they’re expecting a major cyberattack at some point over the next twelve months. However, despite that expectation, most also claim that they’re not equipped to deal with one. This is worrisome, especially when you consider how many cyberattacks dominated the news in 2016.

Bob Twitchell, CEO and founder of Dispersive Technologies has said that “There’s a 50/50 chance that a significant cyber warfare attack will be instrumented against the US government, the US military, US critical infrastructure, or the US banking infrastructure” and warns that he believes the target will be vulnerable to such an attack.

With almost all healthcare software, apps, systems and devices connected to the internet, this creates a potential weakness that savvy criminals are looking to take advantage of, so if cybersecurity hasn’t been a priority for your facility, it’s critical that you make it one. Twitchell also predicts that a major hospital will be charged with regulation violations around using an unsecured smart medical device, so now’s the time to make sure that your systems are fully compliant and secure.[1]

One further issue that may become a greater concern is the potential for cyberattacks on individual medical devices. As devices such as pacemakers and defibrillators become more complex and utilize the Cloud and online reporting to monitor the health of a patient, there is a risk that these could be vulnerable to cyberattacks. It is possible that 2017 could see attacks not just on healthcare IT infrastructures but also individual health devices.

2) Use of the Cloud Becomes More Widespread

Following on from the possibility of cyberattacks, while a recent Black Book survey[2] found that more than half of healthcare providers were happy with their current use of the Cloud, an incredible 83% weren’t using cloud storage for disaster recovery, so expect that figure to change as more and more facilities prepare for worst case scenarios.

However, although the Cloud can help with data recovery, it’s likely that healthcare providers will take advantage of its many other benefits too. For example, the Cloud offers an efficient and effective way to process data, providing a secure platform to protect patient confidentiality, a scalable platform that can grow as the data set increases or a project’s needs change and a collaborative platform that allows staff to work across disciplines or even locations.

It is predicted that healthcare spending on cloud services will rise to $9.5 billion by 2020[3] as medics, administrators and patients alike all demand increased efficiency, security and control over their information.

3D printing technology has already made its mark on the healthcare industry, offering cost effective solutions to what were once expensive problems. In general, new medical technologies are expensive when they are first released, with the cost gradually decreasing over time. However, since 3D printing has been around since the mid-1980s, it is already a reasonably priced service, something that will be key as our aging population increases demand on the technology.

Many research projects could potentially transform the way we treat certain conditions. For example, scientists at Princeton University announced last year that they had used 3D printing technology to create a bionic ear that was capable of hearing frequencies well outside the range of normal human hearing. Impressive for a first attempt at creating a fully functioning organ.

According to the researchers, “[The field of cybernetics] has the potential to generate customized replacement parts for the human body, or even create organs containing capabilities beyond what human biology ordinarily provides.” [4]

In addition to the Princeton research, there is also the development of Continuous Liquid Interface Production (CLIP), a photochemical process that could allow 3D printing to create isotropic organs and body parts that could slash waiting lists for organ donation. 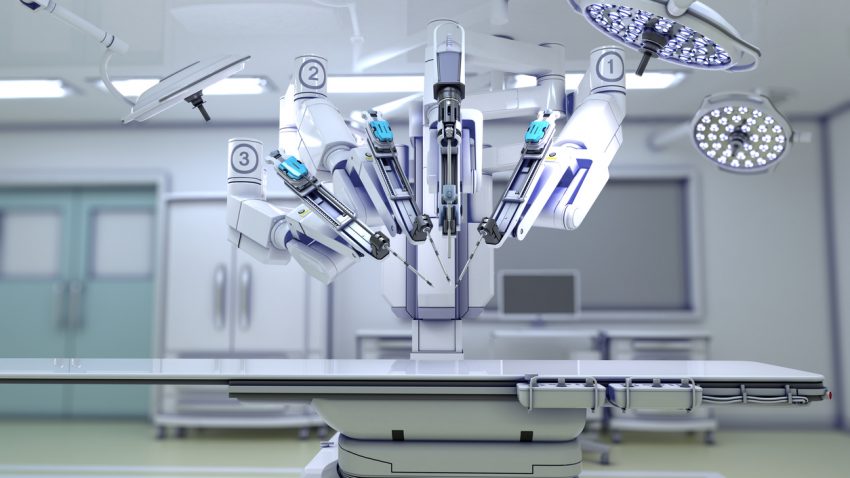 4) The Use of Robotic Surgery in Telemedicine

Robotic surgery has been available for a while, but currently it’s only been available to those in certain areas. It is hoped that minimal access (or keyhole) surgery could become not just universally available but also more affordable by increasing the range of procedures that can be carried out by specialist robot technology.

Many robotic surgery firms are reporting that they have successfully carried out preliminary cadaveric, animal and human trials, paving the way to opening up this technology to the market. By combining robotic surgical technologies with traditional telemedicine, it will be possible to carry out high risk surgeries in rural and remote areas, greatly improving outcomes.

With global annual revenues for robot-assisted keyhole surgery currently standing at $4 billion but predicted to rise to $20 billion by 2025,[5] this is definitely one trend to watch out for.

5) An Increased Need for Data Warehouses

Healthcare facilities are legally obligated to maintain accurate records and capture specific data to comply with various regulations, yet almost all of the hospitals with 200 beds or fewer surveyed by Black Book Market Research admitted that they’re not currently recording all the information they need for actionable population health analytics.

72% of financial executives admitted to Black Book Market Research that while they’re able to generate reports from their electronic health records, they don’t have the IT capability to carry out complex risk modeling, which data warehousing would enable them to do. However, even when hospitals have taken advantage of data warehousing, many say that they still struggle to adequately store and manage all their data.

We expect this to change in 2017. As regulations and legislation means that hospitals are forced to comply, more and more will look to data warehouse solutions to ensure they can handle and manage their data effectively.

6) Finding Appropriately Skilled IT Staff Will Be Problematic

As the healthcare industry becomes ever more reliant on IT innovations, so the demand for qualified, experienced staff to maintain the IT infrastructure will increase. However, finding the right hospital IT staff may become even more challenging than it currently is, especially with changes to the ease of hiring migrant workers.

As it stands, healthcare facilities that depend on foreign workers through the H-1B programs may find that the introduction of new policies surrounding these programs could reduce the pool of available workers, increase the cost of hiring new staff through the programs or both.

The wearable technology industry is a growth market and this is particularly true of the healthcare sector. While exercise trackers are becoming a must-have item, the use of other devices such as glucose monitors is also on the rise. With an aging population, wearable devices will be in increased demand as the need to monitor various diseases and conditions makes these devices ever more essential.

Wearable devices could also replace more conventional therapies. For example, Quell is a drug free alternative to pain relief and has been sold to over 50,000 chronic pain sufferers since its launch in June 2015. Approved by the FDA as a treatment for pain relief without the need for prescription, it can be worn 24 hours a day to help chronic pain. It can be controlled through the Quell mobile app that allows wearers to adjust the therapy levels on their phone, as well as start or stop their Quell. It even monitors sleep patterns to give the user information on how long they slept and the quality of that sleep, as well as their body position and leg movements during sleep. This kind of of wearable device could be especially appealing to those who prefer more natural approaches to pain relief and who would choose a treatment such as a shoulder wrap to deal with their pain.

With the global wearable medical device market valued at over $13 billion in 2016,[6] that figure is only going to rise in 2017.

8) Healthcare Technology Will Increasingly Bring Therapies Into The Home

With an increasing emphasis on patient autonomy, many technology firms are creating devices that allow therapies to take place in the home as well as enable patients and their families and caregivers to take more control over their health.

For example, EarlySense has created a contact-free consumer health monitor that tracks information on a user’s heart health, as well as breathing cycles and even stress and sleep indicators so that patients can get an early warning of any potential issues or track improvements in their health.

Then there’s Neofect’s Rapael smart glove, designed to help stroke patients with their hand rehabilitation. Rapael uses games and AI to improve mobility in hand following a stroke, all in the comfort of their own home. It mimics activities such as chopping food or playing ping pong, increasing the difficulty as the patient progresses. It then analyses data from the glove’s sensors via Bluetooth to create a personalized exercise plan of one to two 30 minute therapy sessions a day.

With so many cutting edge devices being launched this year, it’s an exciting time for healthcare innovations. [7]

The post 8 Heath Care Tech Trends to Look Out For in 2017 appeared first on CIA Medical.