3 Ways to Build Your Fanbase 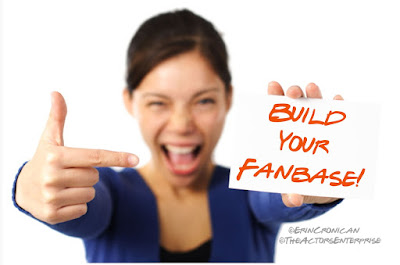 This article was published on Backstage in their "Backstage Experts" column!
I was reading a recent article by casting director, Mark Sikes, wherein he discusses "building your fanbase." In this article, he is speaking about the industry leaders (agents, casting directors, producers, etc) who are in the position to get you working. We've all been taught, over and over, the concept of keeping in touch with industry folks and maintaining the relationships. Very few actors admit to doing this regularly, but we are still aware that it is an important part of our day to day marketing efforts.

But I want to expand the conversation a bit... how do you keep in touch with your OTHER fans? That is to say, how do you maintain your relationships with the folks that will buy tickets to your shows and show up to the movie theater? Today, I want to talk about this concept of BUILDING AN AUDIENCE.

Harrison Ford once said, "I'm an assistant storyteller. It's like being a waiter or a gas-station attendant, but I'm waiting on six million people a week, if I'm lucky." This has always inspired me to remember that the people who really count are the ones who pay for a ticket to watch me perform. And it's no wonder - Harrison is talking about 6 million folks per week! So wouldn't it make sense to build up a REAL fanbase of audience members, and make that your selling point to the industry?

Need further evidence? Those of us who appreciate New York theater know that more and more film and TV stars ("name" actors) are being brought to the stage. And more and more top level film stars are doing commercials and television. This is happening because producers want to hire people who are guaranteed to bring an audience. It is a huge selling point for an actor - there is even the Ulmer’s Scale which breaks down the top Hollywood actors and their bankability (learn more about this here.)

So, how does an actor build an audience?

First: You need to be accessible, 24/7. This means: create a website, and join some of the social networking platforms where your fans are likely to be. Facebook, Twitter, and Instagram are all great places to build relationships with every day audiences. And, if you have a hankering for writing- start a blog!

Second: You need to be willing to spill the beans! Talk about your triumphs. Express your enthusiasm for the business. Create a buzz about your career that makes people want to follow your success. And, in return, support other people's work and herald that as well. The more you involve others in your progress, the more people will feel a part of your career and will champion you as you move forward.

Third: Do good work. I cannot emphasize this enough. You need to be a performer who is worth following. As casting director, Bonnie Gillespie, says, “Get better. Be more talented.” Be at the top of your game. If you aren’t the best at what you do, go get some training until you are. Spend every opportunity you can strengthening your skills, honing your craft, and developing your talent.

If you adopt these three things, you will be well on your way to developing an audience, which will go a long way in developing a long-standing career. So, don't just stand there. Do it!

And... report back to me on how it’s working out for you! Email me with your comments and/or successes, and I’ll choose one story to be featured in my next newsletter and on my blog. What a great way to start building your fanbase- with a newsletter that is read by over 400 people!

3 Ways to Build Your Fanbase