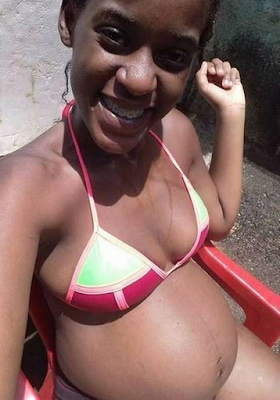 A couple who wanted children of their own but couldn’t because of cysts in the wife’s ovary, have been arrested for luring a Pregnant woman and attempting to cut her baby from her womb, killing both mother and child in the process.
Thaina da Silva Pinto and her husband Fabio Luiz Lima lured 22-year-old Rayanni Christini Costa to their home under the pretence of donating baby items to her.

Thaina who is 21 years old has been married to Fabio for three years, but upon discovering she could not have children she pretended to friends and family that she was pregnant and even went as far as posting photos of her swollen tummy on social media. She then joined a Whatsapp group for people wanting to donate baby items where she then got access to pregnant women in need. 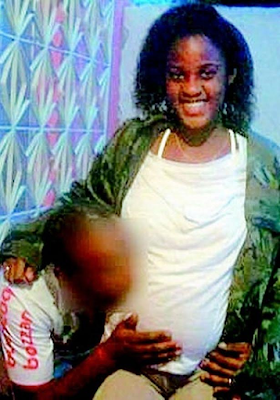 It is believed that she had contacted other poor pregnant women under the guise of offering them charity, but upon discovering they planned to show up with friends she cancelled the meeting.   Sadly, the victim turned up alone to collect the non-existent items after dropping her daughter off at the crèche, only to meet her end.
CCTV footage showed Rayanni meeting her abductor, Thaina, at the Central do Brasil train station in Rio before Thaina convinced her to follow her back home where her husband was waiting. The police have disclosed that a knife was found in a room in the couple’s home and there were pools of blood in more than one room. The charred remains of what is believed to be Rayanni’s body and her baby’s was also found in the home of the couple in Rio de Janeiro, Brazil.