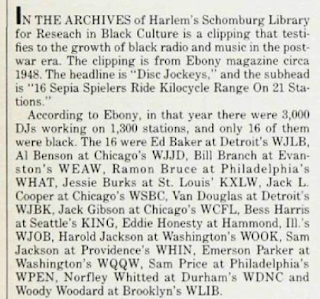 I've never found the original article, but it's referenced in a few books and one very notable Billboard article by Nelson George in November of 1985. Over half a century later I have no way to vet their stats but it's all too believable. The key claim is as follows "In 1947, there were three thousand disc jockeys in the country, but only sixteen were black."

It appeared on page 44-47 in their December 1947 issue. Four years later Mr. George wrote a book The Death of Rhythm and Blues and the book appears again in the works cited. But it also was cited in Doowop: The Chicago Scene by Robert Pruter, Nothing but Love in God's Water by Robert Darden, African Americans and the Media by Catherine Squires. (For the record DJs had been called Spielers since at least 1939.) Their definition of a Spieler is unclear but we can infer much from the list itself (below) we can exclude one-shot performers. These are DJs with a music program, not news programs.


I've written about most of these DJs at one time or another. So perhaps that is why Major Robinson for was not included for his NBC radio column was back in 1948... but he was also one year too late for the article. Mary Dee Dudley, the first black woman to be a radio DJ misses the list by one year. Holmes "Daddy-O'Daylie of WMAQ misses the mark. Even the great Bill Hawkins at WHK misses by just a few months. This was only a list of black DJs active in 1947. The year was very early in the struggle for civil rights so it's certain that the list is short.  But some of the omissions are notable: Bill Cook at WAAT, Dan Burley at WWRL, and Lavada Durst at KVET to name a few... but only a few.

But I should comment on math and veracity:  The number 16 is very specific and allows me to suggest possible omissions. The number 3,000 is clearly an estimate. According to a November 1947 report by the FCC there were only 142 commercial radio stations operating in the U.S. in 1942.  Radio researcher Jeff Miller was able to add 6 non-commercial stations [LINK] to that tally for a grand total of 148.  So that 3,000 number is assuming 20.27 DJs per radio station, and considering the number of part time radio stations in that era, is actually plausible. But it also means that 0.533% of all DJs in 1947 were black or that 99.46666% of all DJs were white. So adding a few names to this list changes exactly nothing.


This post first appeared on ARCANE RADIO TRIVIA, please read the originial post: here
People also like
Albania: Explore the Forgotten Side of Europe – 15 Best Things to Do in the Albanian Lands
Netflix to now add a live streaming feature on its app to keep its subscribers
How come so many Christians don’t really know God?
The Friday Roundup – Creating and Optimizing GIFs Plus D.I.Y. Reflectors