We all know the concession speech: the half-hearted patriotic rhetoric, the fallow optimism, and the trite attempt at closure. The actual wording is moot. They're all the same. But the private concession phone call is more informal, more personal. But both of these are relatively recent contrivances. Prior to the advent of broadcast media, election results bore significant travel time. The candidates were oddly detached from the process. The first known "concession telegram" was sent by William J. Bryan to Mr. William McKinley two days after losing the after the 1896 US presidential election.

Our modern formalized performance art version of contrition can be traced back to 1928.  President Warren G. Harding [R] died in office already  un-electable following the teapot Dome scandal. His vice president Calvin Coolidge [R] completed his term, and one of his own. Then voluntarily elected not to run for a third  term in 1928.  He explained in his memoirs:

"The Presidential office takes a heavy toll of those who occupy it and those who are dear to them. While we should not refuse to spend and be spent in the service of our country, it is hazardous to attempt what we feel is beyond our strength to accomplish."

So in 1928 we had a clean slate, with no incumbent advantage. That year, Democratic New York Governor Al Smith ran for President of the United States against Republican Herbert Hoover. When he lost, he sent Hoover a congratulatory message but also gave a public concession speech on the radio.

But Al's nomination at the Democratic convention had began with radio as well. The DNC was held in Houston, TX that year. But Al was not in Texas. He sat in Albany with his family listening to the convention's  network broadcast each night. This was not a first. The 1924 conventions had also been broadcast. In '24, AT&T wired a convention audio feed to 18 stations and another set of 12 were lit by RCA.  More here. 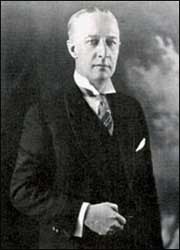 Ironically radio was part of the reason Smith lost the election. The microphones of the say were primitive.  These early condenser mics were very sensitive to sound pressure, pitch, and proximity. Smith struggled to restrain his normal and very animated live speaking style. Consequently his voice distorted and faded out often. Hoovers more reserved midwestern delivery came across better on air.  Hoover won and after October 29th 1929 everyone in America lost.

But Al Smith didn't go away. He eventually learned how to properly use those cantankerous old microphones.  After Hoover had proved impotent in the face of economic obstacles (and Prohobition), Smith found new political life in opposing socialism, and communism.

In 1934, Smith joined forces with wealthy business executives who funded the American Liberty League. With their bankroll The League published pamphlets and sponsored radio programs, arguing that the New Deal was destroying personal liberty. It was propaganda, of course. The League printed 135 pamphlets and a monthly newsletter between 1935 and 1936. Smith gave a number of firebrand speeches broadcast nationally in prime time over the CBS radio network. Nonetheless in the depths of the great depression, the choice between hopeless poverty and dogmatic libertarian ideals lacked appeal to the common man. Franklin D.Roosevelt was re-elected in a landslide. The American Liberty league was dissolved in 1940. Smith and Roosevelt later found themselves politically aligned in supporting Americas involvement in WWII.