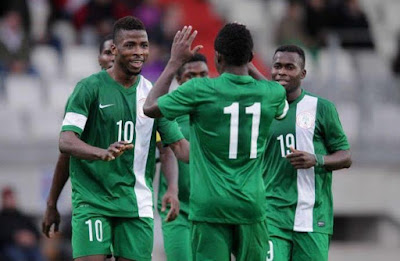 Ahead of the all important Super Eagles Russia 2018 World Cup Qualifier against Zambia on Sunday, the NFF has revealed that the team will depart Nigeria on Saturday via the Nnamdi Azikiwe International stadium, Abuja.

The Nigeria Football Federation also revealed that some top government officials, NFF officials and media representatives will join the 23 players and 15 team officials on the Chartered Flight that will will arrive in time for an evening training session at the Levy Nwanawasa Stadium in Ndola, Zambia.
NFF 2nd Vice President Shehu Dikko. said to theNFF.com :“We have allocated slots to some stakeholders because it is a chartered flight and a number of seats are available after the players and team officials have taken their seats.
“The NFF is not paying anybody for being on the trip. We don’t have the money. All the stakeholders on the trip will be there simply to support the team during the game. We have told the persons involved that they will pay for their own board and lodging, and they have accepted to do that,”
LMC Chairman said to the thenff.com: “In the near future, we would look at the possibility of commercializing this kind of opportunity. If you give out, say 80 seats, to persons who can pay for them on 145 –seater aircraft, you can raise some good money for the team. It is a practice firmly in place in some climes.”