Would Be Possible to Get a Quick Autograph?

I wouldn't call myself an autograph collector, but I can remember the very first Autograph I ever got. It was a disc jockey in Lawton, Oklahoma who went by the moniker the Dingbat Cajun.  Unbeknownst to most of his listeners, the Cajun was on active duty at Fort Sill and happen to work at my Dad's office. The DJ thing was only a part-time gig. Anyway, when my Dad was talking about this guy over dinner, he asked if I wanted him to get me an autograph. I told him yes, but I had no idea why.
Within the next year or so, I took it upon myself to send Rowan & Martin's Laugh-In several sketch scripts I had written. Just imagine, if they had accepted those scripts I would've probably been the only 14-year-old writer on their staff. Alas, it was not meant to be.  Eventually, I did perform one of the sketches at an open mic night in St. Louis years later -- it did get laughs – but that’s another story.
Over the years, I've picked up a few autographs here and there. Mostly performers or writers, with the occasional offbeat person who was important to me -- I went to a Veteran’s Day speech by Adrian Cronauer and managed to get his autograph.  I also have a copy of the Da Vinci's Codex Leicester -- not autographed by Leonardo but signed by President Ronald Reagan.
The thing is, I've never been a worshiper of those whose talent I’ve admired and appreciated. Therefore, the autographs to me are more a record of the fact that I was able to meet them in person and spend a moment with them. Those autographs have never been anything I wanted to sell but have a value that is special to me. 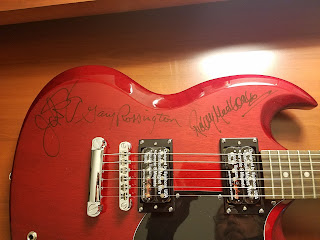 Last year, I was able to add a guitar signed by several of the members of Lynyrd Skynyrd to my collection, and the autographs of the Temptations.
Since I already had two guitars my collection, the other being a guitar that was signed by all of the members of the Trans-Siberian Orchestra, I wanted to get something different when I went on the Southern Rock Cruise this year.  Then I had an epiphany… before I left on the trip I stopped in at a music store and picked up a drum head.  Drum heads are the perfect autographable object.  There is a lot of open clean space that is easy to sign, and they are easy to display because almost any square framed box will do.
During the cruise, I wandered the decks and carried the drumhead. I was asked a few times which band I was the drummer for.... I told a few folks I was with The Black Preacher Rhythm & Cowboy Band. Got some funny looks but no one challenged it.  (See the explanations I gave for carrying around a guitar at the Skynyrd concert here.) 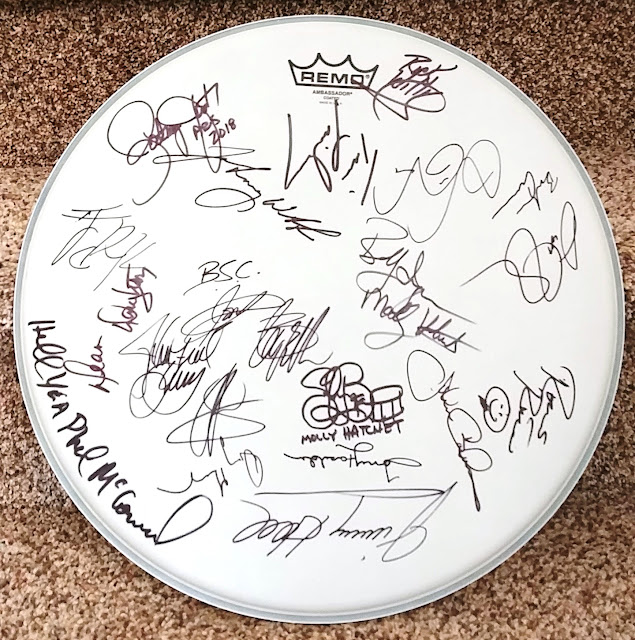 By the end of the cruise, I had the Atlanta Rhythm Section, Preacher Stone, Black Stone Cherry, The Cowboy Poets, Marshall Tucker Band, Molly Hatchet, LeRoux, and Wet Willie. Each autograph was obtained while having great brief conversations with the signer.
Soon, I will get a wood case to display it with some other memorabilia from the cruise and have a great memory piece.
I may pick up the occasional autograph but I seriously wonder about those people who collect scarves with Elvis' sweat on them or Justin Timberlake's half-eaten French Toast.  Too far.
148,280

Would Be Possible to Get a Quick Autograph?