Superman may help elderly people cross the street and rescue kittens from trees but his charitable endeavors end there. DC Comics has opposed the trademark for COSTOMERS WITH A CAUSE, a charitable organization that organizes cosplayers to visit hospitals to entertain children.

Costumers With A Cause is a registered non-for-profit organization that helps organize cosplayers to visits to children in hospitals, who are at home suffering from chronic and terminal illnesses, or children with disabilities.The organization functions solely on donations and to support the effort the charity has adopted the Logo that can be seen to the right and sell merchandise, including t-shirts and stickers, that bear the logo. Let’s not kid ourselves, the superhero in that logo looks a lot like Superman and the charity has several images of cosplaying Supermen on its website and Instagram account. 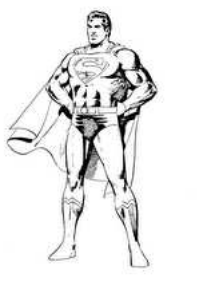 The first story of Superman was published back in 1938 and, arguable, he is the most famous and popular comic book character of all time. DC Comics has been using the trademark ever since. DC Comics owns numerous registered marks for the name, SUPERMAN, the diamond logo, and also some for the look of Superman including the trademark that can be seen to the left.

DC Comics has opposed the logo claiming that it is confusingly similar to its SUPERMAN family of marks. In its opposition, DC Comics notes the charity’s several uses of Superman on its website and claims that people are bound to think the charity is associated with DC Comics when it is not. The charity did have an attorney file its registration application and it will be interesting to see if they will fight it. I can’t imagine they will do so but hopefully a common ground can be met. Perhaps the charity will walk away from the registration but still be allowed to use the logo. Not only Superman can bring peace but so does common sense.