Not saving water!! Then you are next in queue for scary dreams. 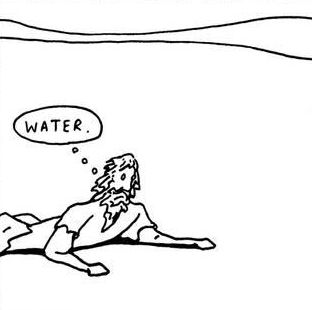 I was in a far land.
And all I can see around me was sand..
I was sitting on my knees..
I was making thousands of pleas..
“water, water, water”, the three magical words that were echoing,
I just hoped someone could have heard them and suddenly pour in..
But there was no sign of man in that terrain,
The real bliss would be then, dropping drops of rain..
But sun raised its bar and the heat frowned more me,
I was, now losing all my strength and energy..
“Save me, save me, save me” is all that I was whispering..
And then suddenly,
Someone shook me up and shouted at me,” Wake up Ankit!! It’s already 12 in the morning..
Yes!! That was a dream!!
Thank God!! That was just a dream.
From last few days, the Frequency of dream has become more and more. Since I have bought the new car and started washing it once in a week( with pipe obviously), the frequency of dream has also became once a week.
Since I have started taking shower (instead of using bucket for bathing), the dream haunts me every other day.
Since I have brought back the habit of running the tap while brushing my teeth, the dream scares me every day and I wake with sweat and fear in the middle of the night.
After struggling a lot, I decided to consult a doctor and I went to see a psychologist.
I booked the appointment for the best psychologist in the town, Mr Krishnan Ayyer.
My appointment was scheduled at 12:00pm in the noon and I reached there by 11:30 am only. I desperately wanted a solution and that too as soon as possible. My dark circle are now becoming darker and the tiredness was clearly visible on my skin.

Not saving water!! Then you are next in queue for scary dreams.