The Queens of Pop: In The Mix
Telegram Marketing solutions
The Connection Between Sleep and Fitn…
How to Build an EV Charging Station F…
Quick And Proven Ways To Make Money O…

He said that walking out on former President Goodluck Jonathan, governors, Board of Trustees (BoT) members and other prominent party leaders at the Abuja meeting “revealed the character of Sheriff and spoke a lot about him”.

According to him, Sheriff’s conduct on that occasion was not just disrespect for Jonathan but a proof that he cannot be trusted.

Sheriff had told newsmen that he walked out of the meeting convened by Jonathan to find solution to the party’s leadership crisis because he was not allowed to address the session in his capacity as national chairman.

Ogidi said that Sheriff had obviously showed that he was not competent to lead the PDP “and even to be chairman or head of a village meeting”.

He said exhibiting such action in the presence of Jonathan who granted him a waiver into the party was condemnable.

“Sheriff showed that he is not a PDP member or a party man. Sheriff did not know what PDP went through for 16 years.

“Who is Sheriff and when did he join​ PDP? It was the same Jonathan that he disrespected that day, who gave him a waiver to join.

“He is not a member of the party; he does not understand how the party works.

“The former president convened a meeting, and by his status and capacity, everybody responded.

“Former Senate Presidents, David Mark and Adophous Wabara and others, including former national chairmen, were all there. Who-is-who in PDP were there as well as the founding fathers of the party.

“If Sheriff was an intelligent man, he shouldn’t have done what he did. Even the small supporters he had, he disappointed them; some of them felt so bad.

“If he was a party man he wouldn’t​ have done that.

“Let us take for granted that we in PDP offended him, is that how to treat the party?

“I haven’t seen where a man is bigger than the party. Your community can offend you but you cannot do anything to your community,” Ogidi said.

He recalled that PDP had in the past had issues with its national chairmen at different times, even at conventions, and they were resolved amicably.

“Even when Chief Audu Ogbe, a former chairman of the party, had issues with former President Olusegun Obasanjo, he didn’t behave like this.”

Ogidi said that Sheriff was acting national chairman, whose substantive position was being recommended by the National Executive Council for endorsement at the May, 2016 national convention.“He was never a chairman,” he said.

He, however, urged members of the party to rise now and speak up, saying “this is the time to speak”. 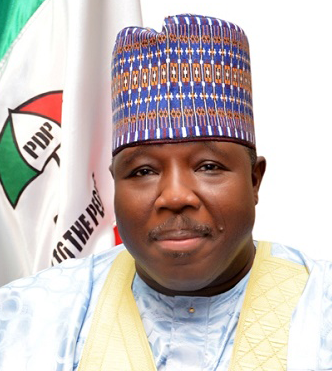