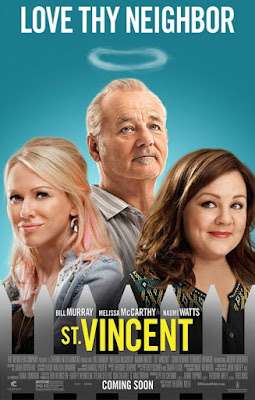 I love Bill Murray, Melissa McCarthy and Naomi Watts so passing St. Vincent was not an option for me, even more so if you consider the film got a Globe nomination for Best Comedy/Musical. Unfortunately, my cinema didn't show it, I missed it and it took me more than four years to catch up.

The story follows Vincent (Bill Murray), an old, grumpy and alcoholic Vietnam veteran who lives alone and gambles regularly and whose only friend is a Russian sex worker named Daka (Naomi Watts). When Maggie Bronstein (Melissa McCarty), a med-tech divorcée, moves to the next-door house with her eleven-year-old son, Oliver (Jaeden Lieberher), Vicent offers to babysit him for money and he soon turns out to be exactly the mentor Oliver needs as the kid has to deal with his parents' divorce and the new school.

St. Vincent's story is far from being original and follows every single cliché of the genre where you have a grumpy man being softened by a kid in need of a father figure. It's predictable and doesn't have a surprising twist at the end. However, despite these flaws, the story is engaging and interesting to follow, but most of all, it's one of those feel-good stories with a happy ending you are longing for and that successfully manage to put a huge smile on your face as the final credits roll in.

The characters too are stereotypes, from the alcoholic, rude old man who gambles with money that is not his and with no apparent redeeming quality, to the kid who is the walking stereotype of Catholic School life, to the single mother is going through a divorce because her husband cheated on her. But just like with the story, you are willing to overlook these flaws because they also are likeable, sympathetic and they feel real.

And the credits for it entirely go to the cast. Bill Murray is a delight to watch and gives a funny and charming performance in the role of Vincent as he does great with his character's eccentricities while also showing his humanity and big heart. Naomi Watts is quite a show stealer in the role of Daka, the lady of the night, as Vincent calls her; she really fleshes out the character and her Russian accent is pretty good. Melissa McCarty showcases her dramatic talents in the role of the single mother. Chris O'Dowd shines as Brother Geraghty, a teacher in Catholic school, and brings some enjoyable Catholic humour in the film. It's Jaeden Lieberher, however, that completely steals the scene. The young actor is so likeable and sweet it's a joy to watch, and his chemistry with Murray is incredible.

Ultimately, St. Vincent isn't anything new but it's still a touching, funny, sweet and heartwarming feel-good movie with a charming cast.