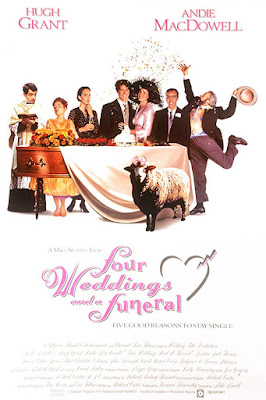 While I've heard of Four Wedding and a Funeral many times over the years, always from people who enjoyed the film, I never watched it because of Hugh Grant — I'm probably the only woman in the world who feels this way but I don't like him.
The story follows a small group of friends as they attend four weddings and a funeral of mutual friends or acquaintances — hence the title —, and it mainly focuses on Charles (Hugh Grant), a carefree bachelor who is some sort of perpetual Best Man. At the first Wedding though, he meets Carrie (Andie MacDowell), a young, free-spirited American woman, and falls in love with her, and over the course of the four following gatherings, he reassesses his thoughts on marriage.

It's definitely not your standard love story, I'll give the film that, but the plot is nearly non-existent, it's filled with holes and it's incredibly predictable for most of its running time —while I was expecting someone else to die, the happy ending can be foreseen from the very beginning.

The characters didn't particularly strike me either. They are barely characterized, they don't have any depth, especially the supporting characters, and no backstories — I read that they are given in a deleted scene, but they needed to be in the film — and because of these lacks, it's almost impossible to care about any of them.

And yet, I did care about them. Actually, I cared about Charles, the self-centred bachelor played by Hugh Grant, the reason I didn't watch the film before. My heart ached when Carrie kept turning him down and when she went on marrying that old dude, as I really wanted Charles to be happy and the credits entirely go to Grant. He gives such a charming performance and gives the character just the right amount of insecurity that it makes it hard if not impossible to not root for him.

The supporting cast does a fine job, the most memorable being Kristin Scott Thomas and Rowan Atkinson in the role of Charles's enigmatic friend Fiona and Father Gerald respectively.

Thankfully, the cast isn't the only enjoyable aspect of Four Weddings and a Funeral as the film is filled with charming, subtle British humour and some nice slapstick and manages to be quite funny throughout its running time.

How to Make Number 13 to Your Lucky N…
Exhibit D: Lipstick and rifles--Ukra…
Window Shopping in Historic Downtown …
10 Benefits of why you should hire th…
Alibaba Plans to Tokezine it’s New Fi…