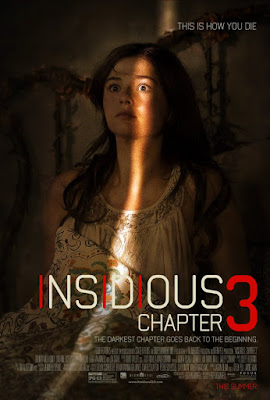 Although Insidious: Chapter 2 turned out to be a huge disappointment, I still decided to check out Insidious: Chapter 3, naively thinking that a change of director and cast could bring the franchise back from the dead. I was wrong as it turned out.
The film is set several years before the events of Insidious and follows Quinn Brenner (Stefanie Scott), a teenage girl who, after trying to connect with her dead mother (Ele Keats), asks psychic Elise Reinier (Lin Shaye) to help her. Elise refuses to help her, Quinn tries again to contact her mother alone against Elise's advice and ends up awakening and being haunted by The Man Who Can't Breathe (Michael Reid MacKay).

This is easily the weakest plot in the series so far --I'm sure The Last Key will prove me wrong tomorrow--, as it is simplistic at its best, it makes absolutely no sense, nor it isn't a bit compelling. It is pretty much event-less for most of its running time and when something finally does happen it isn't that great either. Actually, the ending doesn't pay off at all.

The characters are goddman awful too. They are bland and uninteresting as they lack characterization and development. Most of them --Hector (Ashton Moio), a teenage boy neighbour who has a crush on Quinn; Maggie (Hayley Kiyoko), Quinn's best friend; Harry (Jeris Lee Poindexter) and Grace (Phyllis Applegate), an elderly couple living in the same building as Quinn; and probably more I can't think of right now-- have absolutely nothing to do with the plot, they just appear and disappear without any reason.

As for the acting, it is barely decent which definitely is not enough for a horror movie as I believe it's the believable performances that help a movie scare its audience. Lin Shaye, who once again returns as psychic Elise Rainier, is the only one who somehow manages to give a good performance. Although she is a little too overdramatic at times, her sassy, confident Elise kinda holds the film together.

The direction is a mess as well. Busy filming Furious 7, James Wan left the directing chair to Leigh Whennell, the writer of the two previous films, and Whennell, being this his directorial debut, doesn't quite know what to do. The film indeed lacks the eerie atmosphere Wan was able to deliver with the previous entries of the franchise; the camera work is quite disappointing; the music is often overbearing; the scares are just stupid, cheesy jump scares that couldn't even scare a child. At least Whennell's Specs and Angus Sampson's Tucker provide less comic relief this time.

Review: Other Words for Smoke by Sara…
Fantasia 2019 – The Deeper You Dig Re…
I’m ashamed I have depression. Then I…
Committed: Civil Rights and the Stru…
Learn How to Improve Writing Skills A…

Business has an Insidious Enemy!

Major Habits Holding You Back and How to Break Them