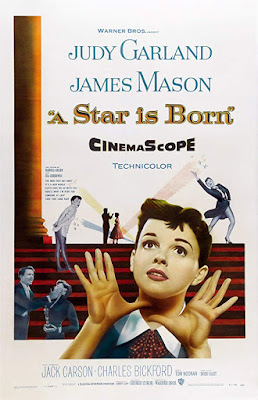 I've been meaning to watch A Star Is Born since the dawn of time but I kept putting it off because of its length. Having read great things about it eventually got the best of me. I guess it's because I had very high expectations but I didn't find it that special, just an average musical.
The film tells the story of Esther Blodgett (Judy Garland), a talented young singer with a band, and Norman Maine (James Mason), an alcoholic movie Star whose career is on the wane. He drunkenly stumbles into her act one night, he is smitten by her voice, takes her under his wing and gets her a screen test at the studio he works for. She becomes a major star, their relationship grows and they eventually get married. But soon Norman loses control as he can't control his alcoholism.
A Star Is Born's is a very simple and familiar story, and it is completely predictable because we know exactly where it's going right from the start and yet it's interesting. Only a part of it though. While the first part, depicting Norman's attempt to make of Esther the person he used to be, is very interesting and compelling, as soon as the two get married, the story becomes heavy and tedious and it gets pretty hard to keep watching.

In spite of that lack, the film still works fine as a portrayal of a marriage destroyed by alcoholism, of alcoholism itself and of someone who is married to an alcoholic. Esther is a (classic) co-dependent wife who is in real pain because of her husband. The problem with her is that she has no resilience and she is too easily humiliated which makes us sympathize with her alcoholic, self-destructive husband, Norman, on whom, by the way, the film focuses too much in my opinion.

Anyway, the actors both go a good job with their roles. Judy Garland does great as Esther as she makes the character's pain so real, and her singing is of course fantastic. James Mason is terrific as Norman as he brings to the screen a character that is so believable it's frightening. Also, the chemistry between Garland and Mason is pretty good.

The biggest issues I had with A Star Is Born is that it is a musical. While most of the songs, if not all, are great and quite memorable, and the numbers are wonderful, some should have been cut off the movie as they add absolutely nothing to it, they only make it longer and serve as an excuse for Judy Garland to show off her singing skills.

Actually, there's something else that bothered me more than the pointless musical numbers, it was the choppy editing and the usage of still photos taken from the production photo library with dialogue playing behind them. Those parts looked terrible and sounded terrible. Sure, it does give us a glimpse of what the movie was supposed to be as it was cut against the director's will, but it just didn't work for me.