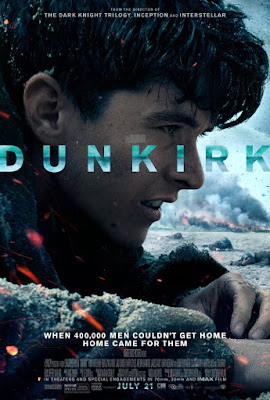 It's undeniable that Christopher Nolan is one of the best directors of our time. Over the years, this man has given us masterpiece after masterpiece, and Dunkirk is another of those. And I say that as someone who isn't a fan of war movies.
Yes, Nolan's latest is a war movie that depicts the Dunkirk evacuation that took place during World War II as hundreds of thousands of British and French soldiers were surrounded by the German Army and their only way out was the sea, and it's told from three different perspectives, that of a soldier (Fionn Whitehead) waiting to be rescued, that of two RAF fighter pilots (Tom Hardy and Jack Lowden) and that of a group of civilians on their boat that is sent to help in the evacuation.
Like many of Nolan's films, Dunkirk too has a non-linear narrative structure, which is pretty uncommon for a war movie, but considering that this film doesn't have a plot, just an unbelievable, true story that needed to be told, the way the story is told is what makes it work. Also, telling the story from three different perspectives, land, air and sea, provides a great insight into the evacuation and shows how hard they all worked to make it happened.
The unusual storytelling isn't the only aspect of the film that makes it not your typical war movie. There are some great battle sequences (that always leaves the enemy unseen) but their only purpose is to show the odds against which the soldiers had to survive and how brave those civilians were putting their lives at risk to rescue the soldiers.
The characters are also very unusual for a war film. Usually, the story revolves around a bunch of soldiers that we get to know and care about. Not in Nolan's film. There are a lot of characters in this one, all lacking in depth and development and with no backstories; most of them don't even have a name. To my understanding, many said this ruined the film for them since they are given nothing to get invested in them. In my opinion, this is Dunkirk's greatest strength. Nolan didn't want to tell the story of another soldier, he wanted to tell the story of Dunkirk and that's exactly what he did. As I see it, if you focus too much on the characters, the film ends up being about them and not about the events portrayed.
Now one may think that because of the lack of a strong protagonist Dunkirk lacks emotional impact but this is just not the case. There isn't the typical brotherhood amongst men usually seen in war movies, there's no sort of emotional connection between the characters, and the actors don't show a wide range of emotions (not a single actor though did a thing about of character, and they all give believable performances) but going as far as saying it's not emotional, well, it's preposterous. There's no war film that made me as emotional as Dunkirk did.
Then there's everything else. The spectacular opening scene, the stunning, breathtaking cinematography, and the outstanding and dramatic score by Hans Zimmer that fitted the film to perfection and brought tension and suspense up to the sky.
Dear haters, please tell me how this is a failed experiment.

చిరంజీవి సినిమాలో రానా దగ్గుబాటి ? – …
A Brief Questioning-Meditating on the…
How to Make Number 13 to Your Lucky N…
Antique Rug Bazaar Orientalist Painti…
Can I consistently feel better?