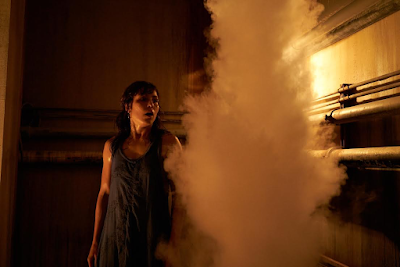 I feel like we don't honor Noomi Rapace enough. Beginning in 2009, she embodied one of the most complex woman characters the big screen has ever seen as the title role in the Swedish trilogy. The Girl with the Dragon Tattoo, and has since been playing the role of "the best actress in every movie thereafter." Gawd bless her.

My Most Anticipated Retellings From J…
What’s New On Hulu July 2019
10 of the Richest People to Stand Tri…
Private Paradise - Whitney & Nathan's…
Netflix Wows with New Dystopian Thril…
As I impatiently wait to see her in Alien: Covenant, I'm intrigued to see that she's teamed up with director Steven Shainberg (Secretary) in the thriller, RUPTURE. Coming to theaters April 28, the film stars Rapace as Renee Morgan, a single mother who is abducted of deranged strangers who probe her with questions. Michael Chiklis and Peter Stormare also star. More in the synopsis:
Single mom Renee Morgan (Noomi Rapace) has learned to be strong by necessity. One day, after dropping her son off at school and going about daily chores, she’s suddenly abducted and locked away in a truck that drives off — and continues driving for days. Wherever she’s being taken, it’s very far away. The truck finally arrives at a large, mysterious facility that could be pharmaceutical, could be governmental, could be anything. A mysterious man begins to question her about her medical history. He then starts asking about her fears. Renee realizes just how irrational and frightening a situation she’s in. Others arrive, observing her. Why Renee? What could these people want? The answers to both questions lie far from any scenario she could possibly imagine.
In case you needed another reason to see this, Shainberg co-wrote RUPTURE with Brian Nelson (Devil, Hard Candy).

Netflix Wows with New Dystopian Thriller, What Happened to Monday

Times are Changing: More Women are Getting Pregnant in Their 30s Than in Their 20s

Song Of The Sea