"Go High is a hit!  Winston Warrior returns to the music scene with a song that is so relevant; a track that grooves, vocals that are smooth with lyrics and a message that speak to the feelings of many people today." 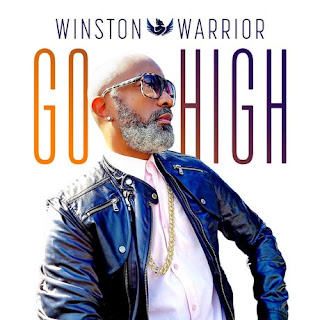 The wait is finally over!  Winston releases his new single today.  As you can tell from the quote above, the Music industry is already proclaiming that Winston's new single "Go High" is a hit.

No one is exempt from getting burned in life.  Sometimes you get burned so badly the lingering sting cripples you, leaving you in limbo and wondering where to go next. When that happens, you can lose sight of goals and dreams altogether … or it can inspire you and provide the exact motivation needed to thrust you into overdrive. If you play it right, the low blows that life can sometimes deal can be used as fuel to propel you to that place where you begin pursuing what you were aiming for in reckless abandon.

This is precisely the story of Winston Warrior, dubbed by some as “the modern day Marvin Gaye.”

Though a perfectionist in his quest to learn from Music, Winston Warrior is by no means a newcomer to her instruction. Warrior, like his signature emblem the Phoenix suggests, is reborn and will keep rising through the lessons and the industry’s ranks.

Hampton Cannabis Expo Founder Gary Bi…
Blxckie reveals where he finds inspir…
5 Best Smart Helmets In 2022
Atlanta born and authentically Southern raised, Winston Warrior painfully lost his virginity to the music industry in the ‘90s. Once a member of the all male breakout group, Lo’ Profile, Winston briefly tasted stardom, to only have his hopes crushed under the pressures of the industry’s harsh realities.  Dreams deferred, he picked up the pieces and became a successful corporate marketing executive, but in doing so quickly learned how unfulfilling it can be to “settle” in life and held closely a deep desire to change course and pursue his dream once again.

While the collaborative dream didn’t come to fruition, the ever-present longing for Winston to create and fulfill his artistic goals never dissipated. The initial setback presented him with the opportunity to acquire new tools to prepare him to re-launch his music career when the timing was right and with a better chance at success.  He was now armed with an undergrad and graduate business degree from the University of Miami and had plenty of production and performance experience under his belt to eventually re-approach his first love with more solid footing. In the meantime, Winston’s star in the corporate arena was on the rise – which gave him the clout to make vital new connections and retain those he had from his glory days in the music industry. The setup was beginning to materialize, however, the sting from the burn of the first outing remained, making him hesitant to pic up the mic and reemerge as an artist. He had been away from the game for so long and his insecurities loomed large, undermining his confidence to sing. But in the spirit of the fabled phoenix, instead of ending his dreams, he was reminded that the ashes of his former music career were meant to set him up for a rebirth … and recognizing that, he became determined to rise again.

Winston returned to music with a vengeance as his debut album, Lifeology 101, released Spring 2011 garnered much industry acclaim for its skilled storytelling and musicality. Featuring Winston’s classic soulfulness and refreshing songwriting abilities coupled with powerhouse production and writing by The Exclusives (August Alsina, Nicki Minaj, Chris Brown, Trey Songz, Lil Wayne, and others), Lifeology 101 earned regular radio and television rotation (Music Choice, Centric and VH1 Soul); nominations for the GA Music Awards and SoulTracks Reader’s Choice Awards; features in several national and international industry magazines, blogs and websites; performances in festivals, clubs and theaters across the US (V103’s For Sister’s Only, KISS 104 FM The Art of Wine & Dine, Apache Café Soul Lounge); as well as the lead single “Bad 4 U” landing at #27 on Billboard’s Urban/AC chart.

Two years into Winston Warrior’s transition from the “Boardroom to Billboard”, the phoenix continued to rise. With the success of Lifeology 101, he became a charming musical and social media force, buoyed by the quality of his artistry and stunning visuals of himself at various stages along the journey of his artistic rebirth.  And the rise of that phoenix turned to soaring as he continued to master life’s lessons through re-experience. Reflecting on his path to date, Winston exposed more of himself and took us back into the classroom in his sequel effort, Lifeology 101…Back 2 School, released in the Fall of 2012:

“When I look back at where I was versus where I am now, I definitely feel like I am blessed. I am living the dream and I don’t want to wake up.”

Now, Winston is poised for another meteoric return with his revitalized modeling career (featuring his distinctive salt and pepper beard) along with his recent international performance this past October in Fukuoka, Japan.  The climax of Winston’s return to the entertainment scene comes with the release of his brand new single “Go High”; again written and produced by The Exclusives and inspired by today’s unprecedented political climate. As he was seeking to avoid being beset again by the unpredictable low blows that life can deal, he was quickened by then FLOTUS Michelle Obama’s speech that addressed that very thing.  She ended her speech with the words, “when they go low, we go high,” which along with aligning with the spirit of the phoenix, presented as the perfect theme for where Winston had been and where he found himself at that moment. The Exclusives embraced the concept and once again artistically challenged him to peel away the layers to the tenderness and master the life lessons put before him.   In Warrior’s raspy tenor voice, underscored with deliberately modest arrangements, he has opened up to create another authentically positive branded R&B smash hit, modernized with infused synth and strong baseline highlights.

Feel free to contact with Winston via social media or through the Vintage contact information below.  He is currently accepting interview requests and booking opportunities.  Get reacquainted with Winston, his music, his journey, and new single “Go High”.

Subscribe to When We Speak Tv- Videos And Interviews