STATE OF THE PROGRAM: Basketball 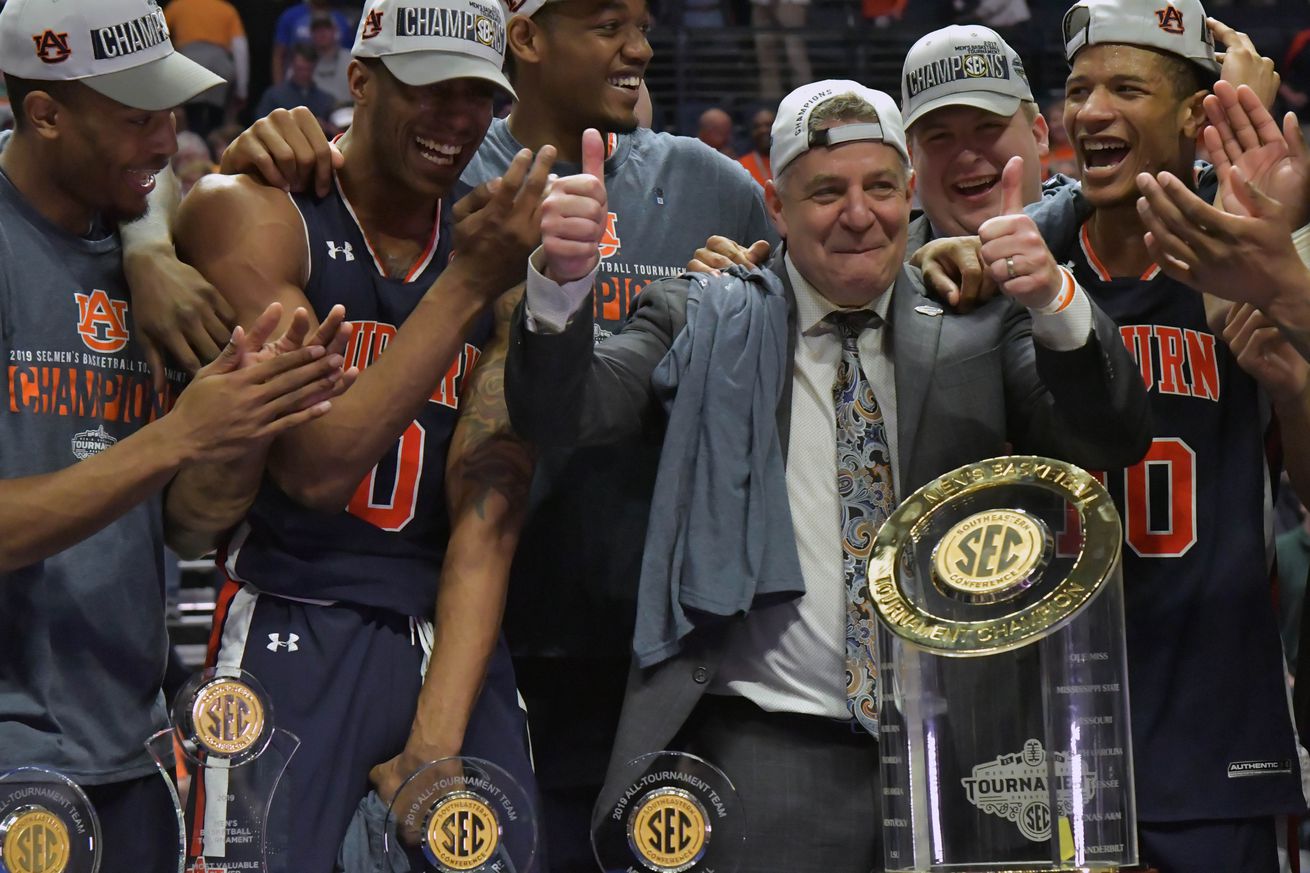 Things are looking rather good for Bruce Pearl’s Program at the moment.

To fully appreciate the transformation of the Auburn Basketball program over the past 5 years, let’s take it back to Day 1 when Bruce Pearl was hired at Auburn in 2014.

Now fast forward 5 years later and here’s Bruce Pearl prior to playing for an SEC Championship....

One of my favorite pregame speeches from Bruce prior to the SEC Championship game. Side note: yes an article from me is coming really soon. pic.twitter.com/D2DSK87uTN

So let’s recap what last year’s Auburn Basketball team did in just a few words.

Last year’s Auburn Basketball team cut down nets (and not just once).

The accomplishments of last year’s Auburn Basketball team means that a banner or banners will be hung inside Auburn Arena.

For the first time ever, the Auburn Basketball team will look forward to a new season coming off an appearance in the Final Four. It was a tough ending as we all know and while this is not designed to bring back painful memories, if you’re like me, you think about how special that Auburn Basketball team was at least once a day.

Last year’s motto for the team was #UnfinishedBusiness. I would imagine, especially for the returning players, that this motto can carry over to this season.

Auburn came within 40 minutes and a missed double dribble call from potentially being the defending National Champions. Be that as it may, to come that close and not win it all is a hard pill to swallow.

In the last 2 years, Auburn has tied for 1st and tied for 4th in the SEC Regular Season Standings. That’s a far cry from the early years of Pearl’s tenure as he was cleaning up the absolute mess the previous regime left him.

Jared Harper and Bryce Brown were sensational manning the backcourt for Auburn but have both moved on to the NBA. Chuma Okeke finally put it all together towards the end of the year and was on his way to becoming a lottery pick before tearing his ACL in the Sweet 16. And yet despite that, the Orlando Magic saw enough out of Chuma to make him the 16th pick in the draft. Also gone is Horace Spencer and Malik Dunbar, 2 guys who provided great leadership and energy on and off the court.

This group of Tigers taking the court in November will feature 5 seniors, 5 freshmen and 2 sophomores. Austin Wiley, Anfernee McLemore and Danjel Purifoy return in the frontcourt and in an recent interview with Blake Lovell, Bruce Pearl said that those guys have had their best summers of their Auburn career and will be huge factors on next year’s team.

Today’s episode of Marching to Madness: @AuburnMBB head coach @coachbrucepearl joins us to talk program’s momentum after a Final Four run, former Tigers earning spots in the NBA, roster development, how the newcomers are fitting in, and much more. https://t.co/D8TOemmW0z

In the backcourt, Auburn returns J’Von McCormick and Samir Doughty. McCormick really turned a corner down the stretch and his play in March gave fans confidence that he can handle the Point Guard position next year. He should make quite the jump from Year 1 to Year 2 in Auburn. Doughty also returns and he made some big shots in some big spots last year. I think he’s going to be even better this year.

The headliner of the freshmen class is Isaac Okoro who will become one of Auburn’s best defenders this year and has the talent and ability to be Auburn’s first 1-and-done player.

In addition, Auburn will welcome forwards Jaylin Williams, Stretch Akingbola and Allen Flanigan to the fold while also adding Turbo Jones to the point guard position.

The two sophomores are Jamal Johnson, a transfer from Memphis, who can shoot the 3 and play at multiple positions and Javon Franklin, the Arkansas native who had an injury that caused him to miss almost all of last year which means he has 3 years of eligibility at Auburn.

Like last year’s team, depth shouldn’t be an issue and how Auburn meshes their experienced players with the newcomers will go a long way into the long-term success of this year’s team.

Keep in mind that Auburn just had their first player picked in the 1st Round of the NBA Draft since 2000. 3 more players just played in the NBA Summer League. Only Chuma Okeke was thought of as a consensus 4-star recruit. For guys like Jared Harper and Bryce Brown, Auburn was a place to come to prove people wrong about them and it’s safe to say both guys did exactly that. Auburn was once a place for guys to come that weren’t wanted by blueblood schools. But with a Final Four appearance on the resume, things have changed in recruiting quite a bit.

These days, Auburn is recruiting with the likes of Kentucky and Duke for the best players available in the country. Auburn is in on several Top 150 prospects for the class of 2020, headlined by Point Guard Sharife Cooper. With McCormick graduating after next season, it is imperative for Auburn to get a PG in next year’s class and Cooper is the #1 target.

Auburn is in on other Top 20 players, including Greg Brown, BJ Boston and Walker Kessler, just to name a few. They already have a commitment from Justin Powell, a guard from the state of Kentucky who is known for his athleticism and 3-point shooting.

The Tigers have their pick of the litter per se of who they want to bring into the program and should have one of the best recruiting classes in Auburn history next season.

For awhile, we weren’t sure if Ira Bowman would continue to be a part of this Auburn staff but after an investigation, Bowman remains with the Tigers. He, along with Steven Pearl and Wes Flanigan return to Bruce Pearl’s staff in 2019-2020 along with Graduate Assistant Marquis Daniels.

Steven Pearl has been coaching with his dad since the Pearl’s got to Auburn in 2014. For Flanigan and Bowman, this will be their 2nd season at Auburn as assistant coaches.

Flanigan’s recruiting efforts, particularly in the state of Arkansas, have been beneficial as several Class of 2020 targets are interested in Auburn. In addition, Flanigan’s son Allen will be a freshmen on the team this year as well and Javon Franklin was a high school teammate with Flanigan so Wes’s efforts in the state of Arkansas are paying off.

When it comes to athletic facilities on the Auburn campus, Auburn Basketball is at the top of the list. Of the major sports on campus, it’s the most modern facility and is becoming one of the better environments to watch a game in college basketball. It doesn’t hurt that the students are right on top of you next to the court either.

Going through some of my old videos/photos and it’s great to be an Auburn Tiger! This was a fun night inside Auburn Arena!! pic.twitter.com/JCWdZTo0fE

Side note: I’m really gonna miss having this view for Auburn Basketball games next year and beyond.

Bottom line is this regarding facilities: compared to most SEC arenas, they’re up there as one of the nicest arenas in the league and other schools are beginning to take notice and look to improve their arenas as well.

The state of the program is as good as it has been in quite some time and perhaps ever. As long as Bruce Pearl stays around on the Plains, the basketball program will be good for quite some time. There will be a lot of faces coming in and out, especially now that Auburn is recruiting guys that have 1-and-done potential but Bruce will get the best out of the group of young men he brings to Auburn to coach. Auburn will have one of the most experienced frontcourts in the country this year and 2 seniors manning the backcourt to complement the freshmen class. While it will be hard to replicate last year’s run, this team should make their 3rd straight NCAA Tournament. NCAA Tournaments are the realistic goal going forward and Auburn has all the talent, pieces and resources to make it an annual thing. War Eagle!

STATE OF THE PROGRAM: Basketball