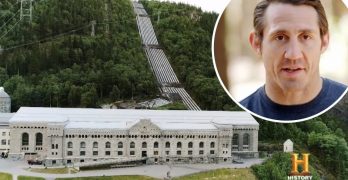 Plans by the Nazis to develop a Nuclear bomb are investigated on this week’s episode of History series Hunting Hitler. The episode sees the team behind the show head to the Vemork Hydroelectric Plant in Norway, from which the Nazis were believed to be planning to use heavy water (deuterium oxide) to develop nuclear arms. The plant was sabotaged by the Norwegian resistance movement — as well as Allied bombing — during the war, to stop the Nazis using the heavy water — an important component of nuclear bombs — for that very purpose. A preview of the Hunting Hitler episode shows an intercepted...read more

CBD 2020: What to Expect + Our Top Pr…
Ripple’s Comment on the Present Scen…
Best Story-Rich Games on PC: November…
NIAGARA COUNTY BITES BACK AT BED BUGS
Incidence and Prevalence of Top 5 Eye…