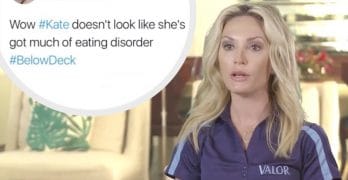 Below Deck star Kate Chastain has slammed a Twitter user for body-shaming her. The user, a woman called Sue from Mississippi, posted a message yesterday commenting on the way Kate looked, saying: “Wow #Kate doesn’t look like she’s got much of eating disorder #BelowDeck.” Kate replied: “Thank you! Currently eating nachos as I type and drinking bud light. And I never work out either!” The Twitter user then replied: “Unfortunately that doesn’t mean there’s not a problem.” She later posted another Tweet saying: “Look at the head to body ratio vs last season.” Kate later screengrabbed the pair’s initial exchange,...read more