Victor Moses Said This: Why I Have Been Successful Under Antonio Conte 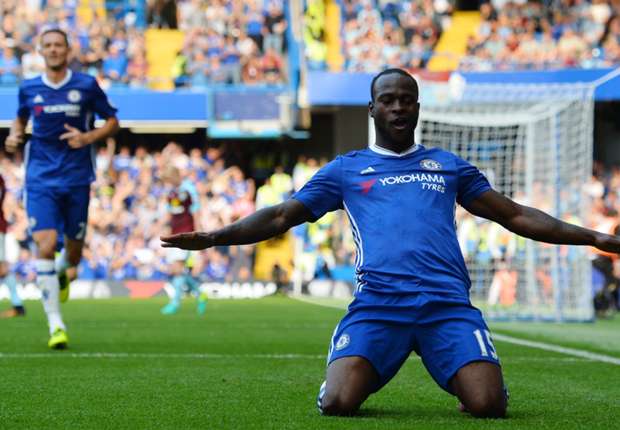 Fresh sports gist trending now revealed that Victor Moses has been an unexpected star of Chelsea's Premier League title charge. Ahead of their Super Sunday showdown with Everton, he sits down with Sky Sports to explain how Antonio Conte has transformed the club and unlocked his true potential.


Report has it that Victor Moses was stuck in a cycle. Every summer he would report to pre-season training at Chelsea, and within a few weeks, he would be told he didn't figure in the club's plans. From Liverpool to Stoke to West Ham, each loan move seemed to
leave him further away from where he wanted to be.

"It's frustrating when you know your manager wants to use other players ahead of you and you've got to go on loan to different clubs," he tells Sky Sports in-between striking drills. "You get injured and all of a sudden you're not getting back in the team. You can't settle well. You've got to move your kids to a new school every season… Stuff like that is always going to play in your head."

Moses trails off as he recalls those times, but this year everything has changed. The Nigeria international has been a revelation at wing-back since Chelsea's switch to a 3-4-3 formation in October, helping them to the brink of the Premier League title and signing a new long-term contract at the club last month.

It has been an extraordinary turnaround. But as he leans back in one of the faded plastic seats at the home of non-league side Cobham FC, where he is midway through the session testing out the new Nike Hypervenom boots with Chelsea team-mates David Luiz and Willian, Moses insists he never lost faith.

"I've never doubted the ability that I've got," he says. "Chelsea is one of the best clubs in the world and I've always believed I have the ability to get into the team. I've proved that this season. I just kept working hard and kept believing in myself. I've moved on from the difficult times now. This is a season I am never going to forget."

Antonio Conte was the man who made it happen. The Italian came to Moses the day before Chelsea's pre-season friendly with Liverpool in California to tell him that he would be staying at the club this season. It's a moment Moses remembers fondly. "For a manager to come up to you and speak to you in that way, it meant a lot," he says. "I really appreciated it."

Perhaps it was the kind of special attention he did not receive under previous manager Jose Mourinho. Moses holds no grudges against the man he encountered again at Old Trafford two weeks ago, but when he talks about how Conte has transformed both his own fortunes and those of the club, it's clear the positive impact his current manager has had on his mind and his game.

"We've got a manager now who gives everyone the opportunity to express themselves," he says. "I felt that from the start, right from the first day of training. He was talking to all the players. There was no favouritism. Everyone was the same to him. As long as you went out and proved yourself, he would give you the opportunity. I was very pleased to see that. It gave me confidence."

Enough confidence to embrace an unfamiliar wing-back role. "The first time he put me there was the day after we lost to Arsenal," he says with a smile. "We all knew the formation he liked to play when he was Italy manager, but I had never actually thought about playing wing-back. After the session he went through it all with me, how to play the position and everything. I took it in and didn't look back."

He made his first start in a 2-0 victory at Hull, and Chelsea went on to win 12 consecutive Premier League games with Moses rampaging up and down their right flank. "I've always played in different positions," he says. "I don't see myself in one position. I'm an all-around player. Wherever the manager asks me to play, I'm willing to do it to help the team."

Moses has become a formidable attacking weapon for Chelsea, contributing three goals and two assists and making more successful dribbles than any other full-back or wing-back in the Premier League this season. With one-on-one coaching from Conte, he has also got to grips with the defensive side of the role.

"He knows I'm good offensively," says Moses. "He has always said to me that I'm very good in one-v-ones, but defensively he's always working hard on me in training to make sure I'm solid. It has helped bring my game to another level. He talks to me a lot. I really appreciate that from a manager."

Moses is not the only one feeling the benefits. Conte's passionate touchline celebrations may have earned him a ticking off from Mourinho earlier in the season, but the players love his intensity. "We want to feel motivated from the manager," says Moses. "He has given us everything he has got. We all respect him for it and we want to work hard for him. We've got a lot fitter this season," he says. "He pushes us hard, but whenever we are out there we are enjoying our football."

As well as being supremely fit, Conte's side are a well-drilled attacking unit. According to Moses, it comes from hours of repetitive work on the training ground. "We memorise moves to gel us together," he says. "We know that if we keep doing the same things in training every day, it's going to be easier for us in games. We stick together and we understand each other."

They understand, too, that their lead at the top of the table must not be taken for granted, with Tottenham in hot pursuit. "He keeps telling us we need to keep our feet firmly on the ground," says Moses, "not to look at the table and to take each game as it comes."

For now, then, the focus is firmly on Everton - and an opportunity to take another significant step towards the title. Chelsea thrashed Ronald Koeman's side 5-0 in one of the most one-sided games of the season back in November, but Moses insists the trip to Goodison park presents a far trickier challenge.

"It's going to be a different ball game this time," he says. "They have the home advantage and they are going to want to get revenge. It's not going to be easy, but we've got quality collectively and individually and we believe in ourselves." And when Moses talks about belief, you know he means it.

Victor Moses Said This: Why I Have Been Successful Under Antonio Conte