See How Man was Caught with Human Parts 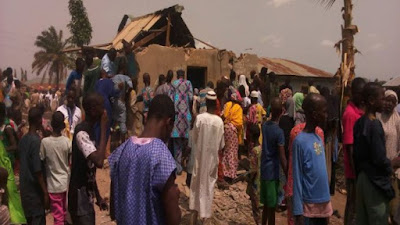 The information on air revealed that A middle aged man has been arrested in Ilorin, the Kwara State capital for
possessing human parts.

Report gathered according to Tribune Online that the suspect had been monitored by residents of Ita Kudimo, Abata Suban, Pakata area of Ilorin West local government in the past few days after speculation grew that he possessed a corpse in his building.

It was also gathered that the neighbours of the suspect swooped on his residence at about noon on Sunday and the suspect was allegedly caught with human parts.

He was later dragged to Adewole Police station in the Ilorin metropolis amidst shouting and rain of curses by the crowd of people.

It was also gathered that house of the suspect was demolished and his properties were carted away by hoodlums who took advantage of the situation to perpetuate their dastardly acts.

See How Man was Caught with Human Parts