Sports Gist as Oxlade-Chamberlain ‘a Revelation’ at Wing-back – Wenger 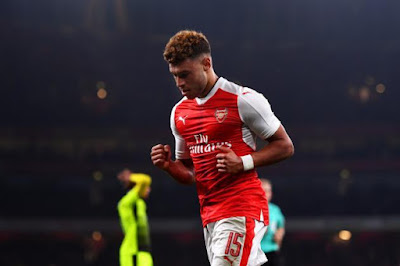 Here is latest Sports Gist as Arsene Wenger says Alex Oxlade-Chamberlain has been “a revelation” in a wing-back position after his man-of-the-match performance in Sunday’s FA Cup semifinal win against Manchester City.


Information gathered as Oxlade-Chamberlain has excelled in Arsenal’s last two games after Wenger switched to a 3-4-3 formation, and was singled out for praise after the 2-1 extra-time victory over City at Wembley. He set up Nacho Monreal’s equaliser with a perfect cross into the area and was at the heart of
Arsenal’s attacking play throughout the game.

Oxlade-Chamberlain has been used both as a winger and central midfielder this season, but Wenger said the switch to wing-back may have found his best position.

“We looked balanced when everybody plays in their positions,” Wenger said. “And some players, like Chamberlain, are a revelation in these positions. Sometimes the system reveals the good position for a player. But overall I think everyone has done brilliantly.”

Oxlade-Chamberlain was named man of the match by both broadcaster BT Sport and Arsenal fans, while centre-back trio Laurent Koscielny, Gabriel Paulista and Rob Holding excelled as well.
Arsenal had conceded three goals in their last four away league games before Wenger made the switch against Middlesbrough last Monday, and Koscielny said the new formation has given the entire team more confidence.

“There was a tactical turnaround, but we’ve been working on it for 15 days,” Koscielny told the London Evening Standard. “In that system, there are players who are good. It’s good for the collective. I think we also found confidence in this system with three defenders.

“We are more solid behind … Before this game, we were in a fairly dark period. We have lost confidence. This victory allows us to regain confidence, and serenity, even if everything has not been perfect.”

Sports Gist as Oxlade-Chamberlain ‘a Revelation’ at Wing-back – Wenger