Being a bed Bug Exterminator Binghamton NY can be a difficult job. Check out the Top 50 Bed Bug City List to see if Binghamton NY is on the list.  A lot of what we do is inspect and treat for bed bugs but its also important to remember we deal with the public.  Bed bugs can make anyone a little crazy and of course our techs have run into some crazy situations.   I took some time to interview the guys (and girl) at our Binghamton branch to see what the craziest stories they had were.  Here’s some incredible stories of what these guys ran into.

“I took over an apartment complex in downtown Binghamton NY.  They had a company called Ehrlich pest control which was spraying once a month.  They told the maintenance guy that they were always going to have bed bugs in the complex.   Maintenance told me that the company would come once a month and the tenants would complain over and over.  Of course I had a hard time understanding exactly what her was talking about on the phone until I got there.  Apparently this supposed technician for this company was their tech for 3 years.  Not sure why but I assume it was to save money.  Wasn’t until Binghamton HUD got involved and recommended us to see what needed to be done.

It wasn’t long into my inspection until I noticed this place was out of control.  This low-income apartment complex was filled with bed bugs.  I mean they were crawling out of the walls and it seemed like they were holding the entire building together.  It was then that a woman came up to me.  She stated she had three kids and every one of them had been getting bit with bed bugs every night for months.  I was heartbroken.  The last technician must have given up.  fist thing I did was find out what this guy was using and make sure I never used that on the property.  Either he was spraying water or these bed bugs were resistant.

It took me 2 months to get them under control.  My boss told me that the cost of the chemical and the labor we used cost more than we made on the jobs for the first few months.  I was there after hours, weekends and even taking a few guys there with me.  We spent hours taking control but they were definitively living in the walls.  I never have and I don’t think ever will see that big of an infestation.”

“There was a woman who had figured out she had a bed bug problem in the most disgusting way imaginable.  I was inspecting her home and bedrooms when she started to tell me this story.  She said that she had been getting rashes and dry skin for weeks.  She was getting it all over her body and she was getting it especially worse on her scalp.  Her breakout was right in her hair and the skin would itch all day every day.  She finally went to the doctor.

After the doctor referred her to the dermatologist they looked at everything and ended up giving her creams and pills to get rid of the issue.  The doctor said she was diagnosed with Psoriasis But then there started to get sores all over her arms.  She noticed they were like actual large sores and bites.  That  is when she noticed a bug i the bed.  She started looking around.  She found them under the mattress and in the seams.  Then she realized.

Those rashes and sores all over her body were bed bug bites and reactions to bed bug bites.  We talked about how they have a little anesthesia in their saliva so we cant feel the bite or itch afterwards.  This allows them to bite us at night without feeling it.  She shuttered at the feeling of all those nights the bed bugs crawling all over her face and into her hair to bite her.  Every night was like a quiet nightmare while she slept.  I still get the chills thinking about the thoughts of having bugs crawling all over me while I sleep and not knowing about it.  I felt sorry for her because I don’t think she was going to sleep well again for years.” 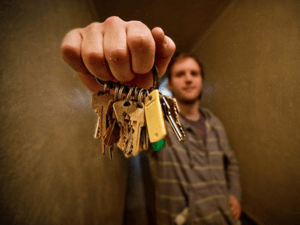 When he moved into the apartment there was a bunch of stuff.  He called the landlord and told him there was a bunch of stuff.  The landlord said take it or leave it.  He should have known then.  One thing that was left in the apartment was a brand new mattress.  Or at least it looked brand new.  He kept it and started to use it after some febreeze and new sheets.  That’s when he started to get bit.  I assumed it was the mattress and the furniture left.  The last tenant obviously left it after they were infested.  He said no one had lived in the apartment for months.  I explained to him that bed bugs can live almost 6 months without a blood meal and then they begin their cycles right back up again.

So he called the landlord and he told then tenant that his dirty stuff is not his problem.  The tenant paid to have all his stuff treated and cleaned and moved out of the apartment and the landlord wouldn’t even give him a break on his rent or his security deposit back.  I guess that why he took him to small claims court after speaking with the City of Binghamton about tenant rights.  Its also the reason I guess I became a Bed Bug Exterminator binghamton ny needs.  I probably wont get involved in the future with court cases or judges but the tenant ended up winning this won.  It did kinds feel like one for the good guys!”

If you discover bed bugs in your home, contact Enviro Pest Control for immediate relief. Our certified team is educated in the most advanced bed bug protocols and equipped with the state-of-the-art resources necessary for complete eradication of these pests.  EnviroPest Binghamton is committed to the elimination and guarantees for bed bugs.