The secret of peace... 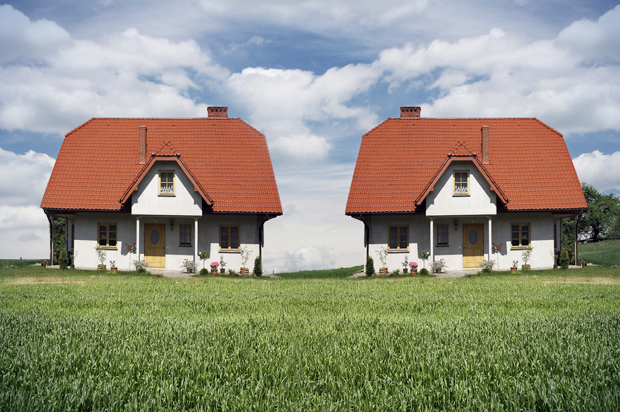 There were two houses standing next to each other. In one of them resided a very unhappy family. The spouses yelled at each other, they fought and quarreled all the time. The other was a place of happiness and calm.
During one of the fights a wife asked her husband:
“Did you ever hear them quarrel or yell over at that house? No!
So, go there and see what they do to avoid it!”
The husband stood at the window of his neighbors and watched. There they were busy doing their own thing. The Wife was in the kitchen cooking, and the man sat at the table writing. The phone rang, and the man jumped up and headed to the hallway to get it.
On his way he bumped into a vase, it fell and broke. He got down to his knees and started picking up the pieces. The wife ran into the room from the kitchen. She also kneeled down and started helping her husband to pick them up.
The man said to his wife:
“I am so sorry. I rushed to get the phone and bumped into the vase. It fell and got broken.”
The wife replied:
“No, honey, it is my fault. I put it there on the way. That’s why you bumped into it.”
They kissed, and that was over. Both got back to what they were doing.
The man who watched them returned to his wife. She wanted to know what the Secret of their happiness was.
What he said was fantastic:
“I know it now. In their Family they both are guilty and in our family both of us are always right!”
That’s the secret of family happiness!
Food for thought.
The "trick" isn't in not wanting to take responsibility, but rather in not claiming right.
There are times you need to forfeit your right to win your peace: depends on which you cherish most.
This recipe is applicable, not only in the home, but also at work and in all relationships.

The secret of peace...