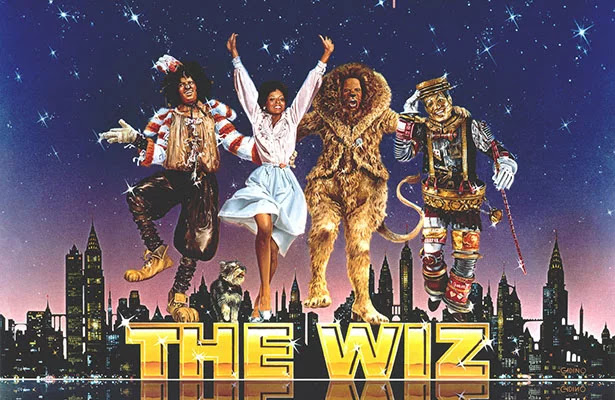 The Wiz, a retelling of The Wizard of Oz. A film loved by people of all generations, and wealth classes. Well, that's how the film is remembered today. In 1978 when it was released critics hated it, viewers hated it. The New York Times credited it with killing the Blaxploitation genre alongside Car Wash. Diana Ross was too old, Nipsey Russell should have stuck to game shows, Ted Ross can't sing, Richard Pryor has lost his touch and Michael Jackson is the only likeable person in the film.

Our film starts with Dorothy enjoying a Thanksgiving gathering with her family. When she's not looking her dog Toto rushes outside. She chases him, but gets lost in a snow storm. She drops from the sky and lands on Evermean, Wicked Witch of The East. Dorothy frees the citizens of Munchkin Land and is gifted a pair of silver slippers by Miss One, the Good Witch of The North. (The slippers in the original story are silver, but the film changed them to red to show off their new color cameras. The Wiz is more faithful to the book than The Wizard of Oz) Dorothy wants to go home, and Miss One suggests she follow the Yellow Brick Road to the Emerald City.

The next morning we meet Scarecrow, as he's being harassed by birds. They call him Garbage Guts, as he isn't a regular scarecrow. He's made up of dirty rags and trash. He lets us all know The Crow Commandments and that we Just Can't Win. Dorothy uses some of her school teacher knowledge to force the crows to leave Scarecrow alone. The two make their way down the road to see The Wizard, as Scarecrow would like a brain. Soon they come across an abandoned amusement park.

There they discover The Tin Man, rusted and forgotten. Longing for the times of the past. He wishes for a heart, so he could feel emotions again. With the amusement park closed, his emotions seemed to go as well. He'd like time to just be vulnerable again. He joins them and they make their way down the Yellow Brick road once more, before being frightened at the library. There they meet Fleetwood Coupe Deville, a lion. He was banned from the jungle because he's a coward.

The challenges they face are a little different than the original film, or book. They travel through an abandoned subway were monsters attack them. Instead of poppy fields, prostitutes called Poppy Girls try to drug them all. Eventually they do make it to The Emerald City. There they meet The Wizard who lives on top of the projects, or towers if you want to be nice. He promises to grant their wishes if they go kill the Evilene, The Wicked Witch of The West who has a sweatshop below the city.

Evilene sends her henchmen, The Winkies, along with flying monkeys to capture our heroes. Eventually she does. They hang Lion by his tail, smash the Tin Man, and takes all the trash out of Scarecrow. Scarecrow convinces Dorothy to pull the fire alarm. The sprinklers go off, Evilene dies and everyone is free. Including The Winkies, who were in magical permanent costumes. They're actually beautiful people Evilene imprisoned so she can be prettier. The monkeys give them a ride back to town and things aren't great.

They go through the backdoor and catch The Wiz changing clothes. The Wiz is actually Herman Smith from Atlantic City. He got sucked into a storm the same way Dorothy did. Herman was a failed politician flying a hot air balloon when he got sucked in. Dorothy tells Tin Man he always had a heart, Fleetwood that he was always brave, and the Scarecrow was always smart. Glinda The Good Witch of The South, appears and tells Dorothy to click her heels together and wish she was home. 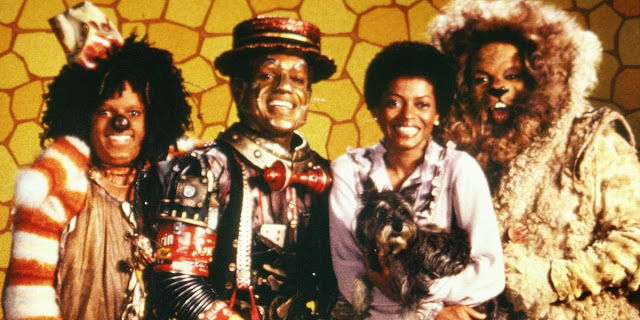 Now, I will say one bad thing about the film; Diana Ross was too old to be Dorothy. I know it, you know it, Barry Gordy knew it and and she knew it too. Barry Gordy told her she was too old and she went around his back to Universal. That's my only complaint. Dorothy was supposed to be a teenager, they had to turn her into a 24 year old teacher for Diana Ross, and that's still younger than the 33 that Diana Ross was, but they couldn't say Dorothy was 33.The original director for the film, John Badham, actually quit because he didn't think a 24 year old Dorothy was any more believable than a 33 year old Dorothy. To his credit, Bedham did go on to have a much longer career directing films than Sidney Lumet who thought Diana was perfect for the role. That's my only complaint, I like Diana Ross and her whole family. She just shouldn't have been the star of The Wiz because there are moments when she acts like a scared child, but looks nothing like a child. Even Michael Jackson gave her some side eyes in the movie.

Despite that, I love this film. Something about The Wizard of Oz film is off putting, and I can't tell you what it is. Watching it always made me feel uncomfortable, as if nearly everyone in the film was in pain or fear. Growing up, it turns out that might have been true. Near death experiences, Judy Garland being slapped by the director to perform better, a director who praised Nazis on set, dogs being paid more than humans. The set was over 100 degrees at times because of the light. They uses asbestos for snow. Looking back, I think I understand why I was disturbed. I'm not saying it is a bad film, I'm just saying it bothered me as a child.

With The Wiz I don't get that. In some aspects it is a much darker film. Yet, it still seems as if there's a gathering of friends having fun. Michael Jackson had left Motown a year prior to The Wiz and they still reached out to cast him because they thought it would be fun to have him on set. When Joe Jackson refused to allow it, Rob Cohen used his own money to rent a penthouse in New York for Michael and Latoya who had never lived without Joe. On the set Michael bonded with Quincy Jones and the two later went on to make multiple classics. People were cast because they were friends or family of other cast members. Even Quincy Jones makes a cameo. The actors seemed a lot more relaxed and it just seemed fun.

Everything about this says they learned from The Wizard of Oz what not to do. The music, is incredible and beyond Quincy, Diana and Michael they brought in artists like Luther Vandross to help. There isn't a bad song in the whole thing. Everyone has their favorite, but you don't dislike any of them. The costumes aren't 100 pounds and made of real lion skin, every costume is put together by a famous designer. People aren't playing 2-8 roles. They hired actual dancers to help create a more vibrant setting.

Still, this day the film has a negative review score anywhere you look, except Google. But, that can be viewed as people who like The Wiz google the The Wiz. Despite that, the film has lived on. Inspiring remakes, homages and is in constant replay on every black TV station you can think of. Fox did write the film off, and Universal was ready. Nobody except the cast and crew ever thought this film would go on to live in people's hearts, yet here we are.

You can check out some of my fiction at 12 AM Fiction or follow my web serial Exsanguinate and of course hear me on the Powerbomb Jutsu podcast.
Follow @OriginalKingD