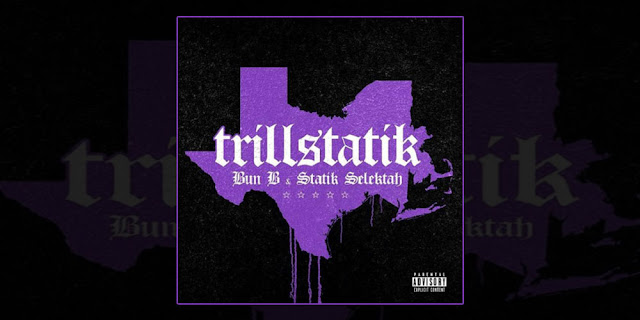 The idea of live streaming the creation of an album is something crazy. However, in today's world of hip hop it doesn't exactly seem absurd. You would expect that a few young kids could come up with a crazy idea like this. Nobody expects it from two people who have already earned their legendary status. Despite that, Bun B and Statik Selektah did exactly that. They live streamed the entire creation of their TrillStatik album for 24 hours straight. From creating and editing beats, to writing lyrics and working on hooks or acquiring guest verses the entire process was there. It was a crazy idea, and I'm not sure who cooked it up, but it worked.

The album is short clocking in at just over thirty minutes. I've previously mentioned I hate short projects labeled albums. The reason being is they often seem thrown together with no central theme or thought put into them. Not this time, thirty minutes is the perfect length for this one. Everything flows so well together. There's no skips on this one, tracks simply flow into the next. While every beat is different, they just sound like they belong together.

Lyrically this one is ridiculous. Bun B as the star of the show flexes his lyrical muscles all over this one and without a doubt has some of the best verses. The album is full of features. Some you expect like Method Man, Killa Kyleon or Big K.R.I.T. but there are others that come out of nowhere like Uncle Murda or Meechy Darko. There really isn't a bad verse on the album. Additionally, it seems like anyone can just ride a beat from Statik Selektah. At times it makes you want to rap. The actual beats themselves are what Static Selektah is known for. Jazzy sounds with a few slowed down samples. The big difference for this one is everything just sounds, bigger. This is an album that's designed to play at big events. While there's plenty of slow and smooth tracks, big drums and bigger horns cause some tracks to just stand out.

There isn't a single song I dislike on the album. Most songs clock in below three minutes, but the strong structure of them all is similar. There's maybe three hooks on the entire project. It brings back the older vibe of rappers just rapping back to back. Seeing as how it was put together in a day, there's a lot of really timely lyrics. Fat Joe might be the first person to make references to both Nipsey Hustle's tragic death and the burning of Notre Dame, only to be followed by Talib Kweli making reference to Nipsey as well.

When it comes to favorite tracks, there's three that come to mind. The first being "Money" with Fame and Wais P. Of course it's a track about money, but less about how much money they have, or how it was better being broke. Instead it's more about how Money will make people lose their sense of self for money. It's just a really smooth track you can ride to and there's of course a motivational speech at the end, which is something that doesn't happen anymore. The next would be "Paperwork," with Uncle Murda." This one just sounds, like the closing act to a movie for some reason and it might be the best verse I've ever heard from Uncle Murda. You don't necessarily expect to hear Uncle Murda discussing racism but it happened. Lastly would be "Time Flies" with Talib Kweli and Big K.R.I.T. This one is just classic, for all three doing what they're known to do. They take a trip down memory lane and ponder on how everything around them changed so fast. KRIT's family has evolved around him and Bun B doesn't seem to recognize Texas at the time, and Talib reflects on how death comes when least expected.

There's a few moments when the mixing and mastering aren't perfect, but that's to be expected when an album is done in twenty-four hours. For example on "Basquiat " you can hear every single breath Smoke DZA takes and if you listen carefully you can hear Fat Joe and Bun B too. It kind of reminds you of Illmatic when Nas didn't really have any breath control and would breathe really hard on every track. But, that's what the album is about, fusing the past and present. It sounds like an old album for sure, but all the technology behind it wouldn't have been around back then. It's a good merger of the two, sure there's a few younger guys on the album, but most features are from people who have been rapping for more than 10 years, even if they didn't necessarily have mainstream success. I don't usually do star ratings, but there's five stars on the cover and out of five stars, it deserves that many.

You can download a free copy of my book Phantasmagorical. Also check out some of my work for 12AMFiction.com or hear me on the Powerbomb Jutsu podcast.
Follow @OriginalKingD