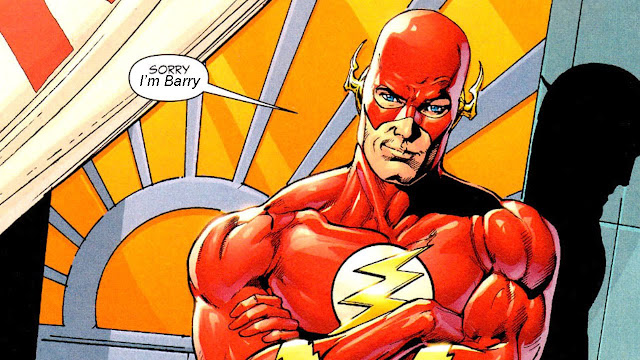 Barry Allen is the best. He shows everyone what it truly means to be a hero. He'll never get caught up on his own arrogance like Batman. He'll always give everything 100% unlike Superman. He'll never snap a neck like Wonder Woman and Aquman. Berry Allen is the best of the best. That's what DC Comics wants you to believe. In reality, he's the worst Flash and lacks all the qualities that makes others so endearing.

Barry is a main character that doesn't do anything. The story doesn't revolve around him and he doesn't change it in any way. Barry is someone who simply lets things happen to him. He doesn't do anything to change this. Thawne just messes with his life because Barry lets him. Barry hasn't taken any steps to stop Thawne for good. I'm not even talking about killing him, because that doesn't work. But Barry has tried nothing at all. He hasn't tried tying his shoe laces together or an oil slick. He just lets things happen to him and he deals with them the most boring way he can.

Except, when Barry wants something. See, Barry is a selfish man. He puts himself above others no matter what people say. Hal Jordan is a man who has clashed with Barry Allen before, mainly because he views Barry as someone who thinks he's better than everyone else. Hal has admitted he's a hero, only because he likes the attention. Barry would never admit that and for Barry it isn't true. But Barry would never admit his selfishness either because he never admits his flaws.

You see Barry didn't trust Wally West II, Black Wally or N52 Wally, whatever you want to call him. So he never told Wally his secret identity, but he essentially stalked Wally and knew everything about him. Do you remember how Flashpoint got started? Barry went back in time to save his mom, despite knowing the consequences it would have based on all his past time travel. He didn't care. He just did it because he could. He's not exactly a great mentor to either Wally. They bonded more in a few moments than Barry did with them through all the combined years he spent with them.

Barry doesn't really have any redeeming qualities as a hero. Feel free to attempt changing my mind. It won't work. I've already decided Barry Allen is the worst Flash ever. Except maybe Bart.
You should buy Darrell's Book, watch him on the Blerds Online YouTube Channel or The CP Time and Powerbomb Jutsu podcasts.
Follow @OriginalKingD