Do you know how bad a Movie has to be to make me doubt LeVar "Read a Book" Burton? LeVar "Blackstronaut" Burton. LeVar "Don't Call Me Toby" Burton. I could probably do this all day. The Supernaturals is that movie. It made me feel that way. I don't even know if this is a zombie movie or zombie ghosts because neither of those use guns. It was bad, it was just bad. 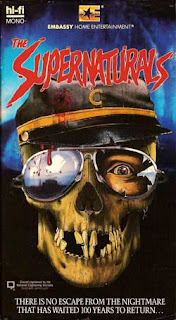 So the movie starts with a flashback to the Civil War. During this time a group of Confederates were captured by the 44th Division of The Union army. The 44th told them they could go free if they made it through a forest filled with landmines. They also made a young boy named Jeremy walk because he was wearing a Confederate uniform. His mother chased after them. They died, they just died left and right. The only people who survived were Jeremy and his mother because Jeremy has magic powers.

In present-ish day the 44th decedents of the 44th Division are in that town on what is likely the 44th day of the year as well, because coincidence. Did they think this was clever? That's also dumb because if we're being real the United States Civil War was only 6 generations ago, 8 if you really want to be generous. So are they just counting individuals? You're the 44th member of this family born since the Civil War, you're going to join the 44th now. What if some families had kids later? Yeah movie, I did the math and you were wrong. LeVar Burton taught a generation to love reading but we didn't slack on the math.

They're going through the woods and they see a beautiful woman. She's named Melanie. They make camp and get drunk. They find a guy shot in the head. Somehow they just decided Melanie did it so they split up like Scooby Doo and the gang, then go searching. They find her in a cabin with an old man who looks like he's going to crumble to dust any second. They take Melanie and leave the old man to die. I mean, that wasn't their intent, but it's basically what they did.

That night some fog rolls through and the ghost zombies of the Confederates kill almost everyone. You should watch this film along with Roots in the "LeVar Burton vs White People" film set. It also includes a few episodes of Captain Planet where Kwame gets a healthy dose of American Racism. The group talks to Melanie and they see her locket which looks like the old man in the shack as a young boy. They go back and they beg him to stop the soldiers. He had been keeping his mother young forever using his magic. They return to camp with Melanie and Jeremy dead.

Honestly, the only good thing about this movie was the makeup and costume design. If the movie wasn't so bad I'd have been in shock looking at the undead soldiers. I later found out the person in charge of all this was Bart J. Mixon who also did Nightmare on Elm Street, and Hellboy II. He's done a lot of good work in his time. This must have been like Suicide Squad winning an Oscar for costume design.

I think Horror movies just aren't for me. Maybe I'm only good at picking the bad horror movies. This not a very good movie, or very bad, as our President Donlad Trump would say. Now, that's a horror movie for you.

You should buy Darrell's Book, watch him on the Blerds Online YouTube Channel or The CP Time and Powerbomb Jutsu podcasts.