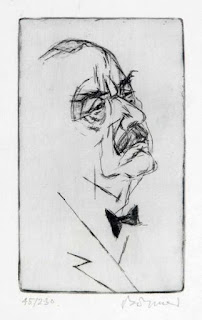 Thomas Mann, in his crazed Observations of a non-political man – one of the most percipient conservative texts of the 20th century – coined a beautiful phrase to describe a vocational community: solidarity of conscience. Alas, an economic theory based on self-interest has little time for what any observer of ordinary life picks up: a sense of the integrity of work. That integrity, for Mann, was about writing as an art. But you see the same spirit of integrity among carpenters, lawyers, janitors, engineers, etc. The motivations, here, are trans-individual – hence the solidarity. There are audiences and peers with whom one feels – the agent, the writer, the janitor – feels some sympathetic correspondence. Even if the peer is an enemy – or especially if the peer is an enemy. This is where everything becomes tricky. In the passage where Mann introduces the notion of solidarity of conscience, he knows that he has been flailing – that he has been attributing the cruelest motives to his enemy, the liberal German, the advocates of democracy (and in particular his older brother, Heinrich) – and he knows that the flailing had to come out in order that it could call up a countering, although not logically countering, irony. The solidarity of conscience allows him to swerve towards the personal, towards the whole affective presence of the writer. Since the writer is writing as a “non-political man”, the swerve here, or the irony, is that the very presentation, beginning with the high minded commentary on Dostoevsky, has been on the level of demagogy – undermining, fatally, the idea of the non-political. That is fatal, a death blow that is more than just logical, to Mann’s conservative purpose, which is to preserve the non-political as the central cultural fact of the bourgeois “Germany” he wants to defend. In a further irony, after bitching his fill about “civilization” – France – and its imperialism, the non-political is destined to become a European cultural fact in Mann’s polemic.
He knows this. He feels, as wounds on his own skin, the contradictions of his position. There is something debilitating about these wounds – I am irresistibly reminded on the wounds on the body of Gregor Samsa after his transformation into a Ungezeifer – a vermin.

Missouri turns to Cleveland State’s D…
Barrister and Mann Review – Shaving P…
NBA Free Streams: Suns vs Clippers Ga…
National Doctor’s Day
Music Profile: Jackie's Boy - R&B Art…
Mann’s dalliance with decadence, or with his homoerotic feelings, is also felt by Mann, in his texts, as a weakness, a draining away, an open wound. It is important to remember that the Observations preceded and overlapped with the work on The Magic Mountain, and that Mann resolved the problem of demagogy by endorsing, in the end, the Republic and its democratic foundations.