What will you give me for the extinction of mankind? Bids start at 600 trillion dollars... 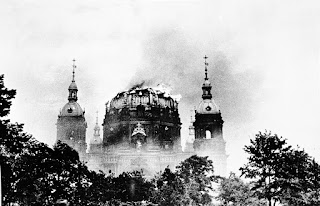 In Catastrophe: Risk and Response, Richard Posner, the most coldblooded judge since the eponymous Judge in Blood Meridian, considered the economics and law of human catastrophes. It was reviewed in Slate in 2004, from which I take this precis of one of his thought experiments.

“Consider the possibility that atomic particles, colliding in a powerful accelerator such as Brookhaven Lab's Relativistic Heavy Ion Collider, could reassemble themselves into a compressed object called a stranglet that would destroy the world. Posner sets out to "monetize" the costs and benefits of this "extremely unlikely" disaster. He estimates "the cost of extinction of the human race" at $600 Trillion and the annual probability of such a disaster at 1 in 10 million.”

The six hundred trillion dollar figure is so absurd that it is … almost touching.  For that 600 trillion dollars, by the Escher-like economics favored by Posner, is equal to zero dollars. In as much as dollars exist as units of exchange, when exchangers don’t exist, the value of the dollar becomes meaningless. However, Posner, who can imagine a world devoid of humans, can’t imagine a world in which money has no value whatsoever. Money, for ideologues of Posner’s type, is something like light – a universal element. This is why the 600 trillion – a sum that has been refined by that other mad economist, Nordhaus, in his insane calculations concerning global climate change – exists as a kind of limit of economics – a philosophical and theological limit.

There is about this sum the whiff of the omnipotence paradox, of which the emblematic problem is this: can God  a rock that he couldn’t lift? The paradox was discussed by George Mavrodes and Wade Savage in the 1960s. Here’s Savage’s critique:

“if "God is omnipotent" is necessarily true-as Mavrodes must claim for his solution to work- then his assumption that God exists begs the question of the para doxical argument. For what the argument really tries to establish is that the existence of an omnipotent being is logically impossible. Fourth, the claim that inability to perform a self-contradictory task is no limitation on the agent is not entirely uncontroversial. Descartes suggested that an omnipotent God must be able to perform such self-contradictory tasks as making a mountain without a valley and arrang-ing that the sum of one and two is not three. No doubt Mavrodes and Descartes have different theories about the nature of contradictions; but that is part of the controversy.”

The whole point of the omnipotence paradox is to let us see what it is we are saying when we say that God is an omnipotent being. This, of course, is not the way God is thought of in many cultures and times – but it is how God came to be thought of by Christian and other thinkers, all of whom, Nietzsche thought, are part of the “platonic” line. As Savage points out, the stone that both exemplifies and limits the omnipotence of God has implications for what is logically signified by omnipotence: “The essence of the argument is that an omnipotent being must be able to perform this task and yet cannot perform the task.” Which, although Savage doesn’t say it, is at the heart of the Christian doctrine – God become man makes itself vulnerable – mortal. Logic is an airy thing, but there is death at the end of it, as any other human enterprise.

Although Posner is as blind as any economist, his six hundred trillion dollar calculation is about the death of money; money as a mortal thing suddenly becomes a very human thing. The worthless dollar, like the stone that God can’t lift or the Son of God dying on the cross, is a story about a material carrier that has suddenly lost all significance.

It is from this point of view that the six hundred trillion dollars becomes  a sort of black hole: the hole into which the Holocene disappeared. No wonder the issue of climate change is pervaded by a sense of the apocalypse. Our evaluations of it, from the point of view of the system of evaluations that gives me the price of my house or of a loaf of bread, goes haywire. This is why I like to think of that mythical, mystical 600 trillion dollars as a sort of being sitting on our shoulders – our planetary momento mori. It is as plain as the Jehovah’s writing on the walls of the King of Babylon, but in a script our most learned calculators of script can’t read. The merest bird of some dying species, though, can read it easily.

What will you give me for the extinction of mankind? Bids start at 600 trillion dollars...