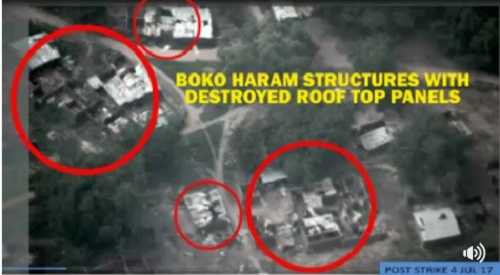 In furtherance of its clearance operations, on 2 July 2017, the Nigerian Air Force (NAF) Component of Operation LAFIYA DOLE conducted an Intelligence, Surveillance and Reconnaissance (ISR) mission of the Sambisa general area, the former spiritual headquarters of the Boko Haram Terrorists (BHT).
During the Isr Mission, a gradual convergence of BHT elements at some buildings in Alagarno Camp 1 was noticed.
NIGERIAN AIR FORCE FRUSTRATES ANOTHER BOKO HARAM ATTEMPT AT REGROUPING
The sight of several Solar Panels on the rooftops of the buildings, and the obvious attempt to conceal the buildings, gave out the plans of the terrorists. A confirmatory ISR mission indicated that the structures were most likely a budding Command and Control facility, which could also house High Value Targets.
Accordingly, on 3 July 2017, the Air Component detailed 3 aircraft namely, 2 Alpha Jet and one F-7Ni aircraft, to conduct Air Interdiction strikes on the buildings in succession. Subsequent Battle Damage Assessment revealed that the structures with the solar panels as well as other adjoining BHT structures were damaged.
Furthermore, a suspected BHT technical vehicle, which was attempting to make a run from the vicinity, was struck by subsequent waves of attack.
Watch video:
Also Read; Click To See Other Services We Offer @ Entertain9ja