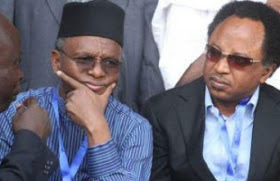 Senator Shehu Sani who represents Kaduna central in the Senate, has described the governor of the state, Nasir El-Rufai, as the Judas in the President Buhari's government of change.
In a statement signed by his Adviser on Politics and Ideology, Suleiman Ahmed and released today, Sani decried the continuous arrest of journalists that criticize Governor El-Rufai...According to him, about 7 journalists in the state have been arrested over their reports criticizing the El-Rufai government.According to him, El-Rufai jails journalists like Pinochet or Stalin. "Journalists in Kaduna state are under siege; blackmailed,arrested, pocketted or threatened with arrest and as such could not have written such a story. El-Rufai jails journalists like Pinochet or Stalin. He is a man with a mouth for criticism but without a stomach for criticism.In his two years in office he has jailed not less than 7 Journalists in kaduna of which many are in court. Kaduna state is run like a personal family and friends estate without any meaningful physical achievement other than sponsored media propaganda. El-Rufai has enough money to pay Herdsmen but no money to pay district heads.Kaduna is today littered with abandoned drainages to the point that the rainy season has turned kaduna into a 'coastal state with creeks'.He is auctioning over two thousand Government houses he inherited but he is yet to build a hut.The Kaduna state Governor who in his memo accused President Muhammadu Buhari of running a failed Government,has failed also woefully.He thinks PMB failed but he never invited PMB to even commission a completed Toilet in his state. Under Elrufai, Kaduna has become a hub of Kidnappers and a sanctuary for Herdsmen. The very Governor who once condemned the National Assembly for lack of transparency has proven to be worse. El-Rufai wants to be seen as an apostle of Buhari's change but he is actually the Judas of change"the statement read
Also Read; Click To See Other Services We Offer @ Entertain9ja

64 Awesome Things to Do in Costa Rica…
NBA Jam Game Comparison
What would happen to a modern-day Mos…
MMOGA – Dead by Daylight: Stranger Th…
Advisors' Creative Solutions for Gett…


This post first appeared on ENTERTAIN9JA.COM, please read the originial post: here
People also like
64 Awesome Things to Do in Costa Rica, Where to Stay, Know Before You Go
NBA Jam Game Comparison
What would happen to a modern-day Moses in America?
MMOGA – Dead by Daylight: Stranger Things Chapter (DLC)
Advisors' Creative Solutions for Getting their Clients Tested Before Travel