Kemi Olunloyo warned Mercy Aigbe on a marriage crash in 2016 — See this! 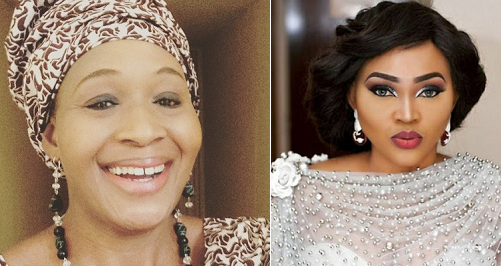 In December 2016, Kemi Olunloyo Warned Mercy Aigbe-Gentry of an impending marriage crash. She warned the actress to stop flaunting herself on Social Media and spend more time with her husband.

….and it just happened!

“@MercyAigbeGentry is a talented #Nollywood star with a flair for “online glamour”. Nothing wrong with glamming yourself up for your fans. Most Nigerian actresses are narcissistic females to begin with and I’m a certified narcissist myself.
“Many Nigerian females are fake and can’t even define their own personalities but look up to female stars and want to be like them. This is why I insist I’m NOT and will never be a role model.
“I have mentored many kids but never want any of them to ‘be like me’. There are attributes of me some parents don’t like yet they want their kids to be me. I’m outspoken, blunt and keep it real. Most women in Nigeria are not but stay as solid mumus. There is only one #KemiOlunloyo .
“Last month I warned Mercy in a post that she’s going to end up like @TokeMakinwa if she doesn’t limit her glam posts online. Honestly your husband is out there Mercy.
“#MajeAyida was busy elsewhere while Toke was glamming up the Gram. Mercy shows off her phone case engraved with her image, something her fans will be thirsting for too.
“They log on fast to see the latest fashion sense. It’s nice to be addicted to celebs. Even I as a media celebrity in US/Canada have now become the top media celebrity in Nigeria still has my own favourite celeb @aihmakhuolutoyin.
“Spend more time with your husband Mercy. I’m seeing things you don’t see. They call me the #Snitchlady. *winks*..and stay beautiful young lady.” 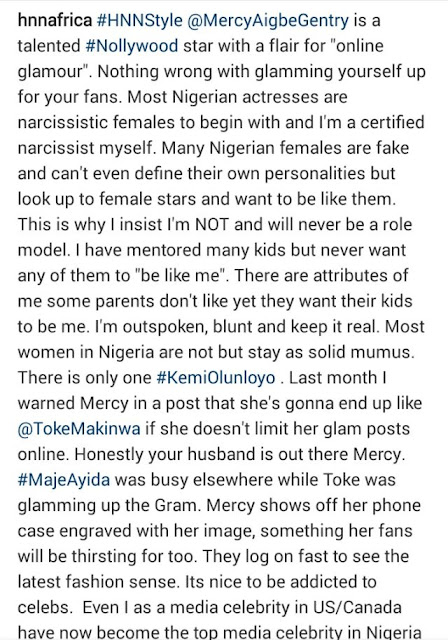 Kemi Olunloyo over time has earned herself a questionable image and reputation as a result of her brand of commentaries on social media as well as her eccentric displays. She was jailed in port-harcourt over defamatory comments she made against Pastor Ibiyeomie and later released after spending some quality time.  she was granted a 1 million naira bail.

The end is the beginning?
Being a (Goth) Black Sheep … and Brin…
I’m Going Home For Thanksgiving This …
How Much Prayer Time Is Required for …
United Nation Officials expresses con…

Kemi Olunloyo warned Mercy Aigbe on a marriage crash in 2016 — See this!