Beyonce is set to run for mayor of Los Angeles office 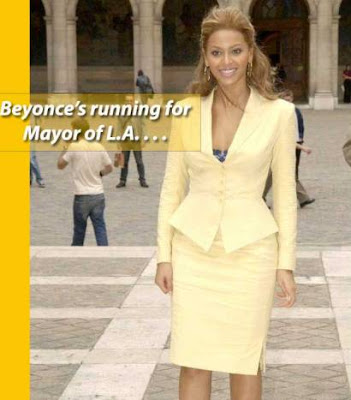 Read the report from MTO below...

MediaTakeOut.com has exclusive learned that Beyonce Knowles, international superstar, wife to Jay Z, and mother to Blue Ivy is preparing to run for Mayor of Los Angeles. This is not a rumor, we confirmed the report with people close to Beyonce.

We spoke exclusively to a very well connected insider, who tells us that Bey has already hired political consultants and is taking preliminary steps to run as early as 2018.
The insider explained to MediaTakeOut.com, “[Los Angeles current mayor Eric] Garcetti is running for governor or senator in 2018. If he wins, there will be a special election for Los Angels’ mayoralty. Beyonce is going to run then.”
We’re told that Beyonce has already established the residency requirements to begin running, and as you can imagine, she already has SUPERSTAR SUPPORT. If she runs, as expcted, it will be the most watched ELECTION CAMPAIGN ever for a mayoralty.

Beyonce is set to run for mayor of Los Angeles office