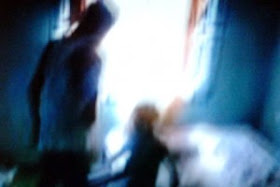 Muslim cleric, Ishaq Gbadegesin, who allegedly fingered his daughter’s private part and also asked her to rub his pen*s at night was on Tuesday granted N100, 000 bail by an Igbosere Magistrates’ Court, Lagos.Gbaegesin, 43, who resides at No. 8, Humuani St., Shomolu, Lagos, pleaded not guilty to a two-count charge bordering on sexual assault.
Vanguard newspaper reports that the Prosecutor, Sgt. Innocent Odugbo, told the court that the Accused committed the offences on Nov. 7, at 4:00 p.m. at his residence. He said that the accused sexually assaulted his 15-year-old daughter by putting his fingers into the private part of the girl.

“The accused also indecently assaulted his daughter by asking her to rub his penis at nights, ” Odugbu said. He said that the offences contravened Sections 136 and 261 Criminal Law of Lagos State, 2011.

The Magistrate, Mrs A. O. Awogboro, also granted him two sureties in like sum. She said that the sureties must be gainfully employed, their addresses be verified and one of them must be a blood relation to the accused. Awogboro adjourned the case till Dec. 14 for mention.

39 Illegal Companies Found to be Oper…
Best Story-Rich Games on PC: November…
Royal Palace Rugs
Quilting with the Husqvarna Viking HU…
What Net Worth Makes You Rich? The Av…