Wrapped in a Bow
Written By: Jody Houser 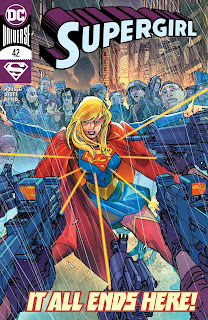 Art By: Rachael Stott, Cris Peter
Letters By: Tom Napolitano
Cover Price: $3.99
Release Date: June 30, 2020
*Non Spoilers and Score At The Bottom*
Well, at long last we have reached this issue. It’s time for things to come to an end. I started reviewing this series when it was brought back from cancellation. Bendis had just hopped on the the Superman books and he told his story, sending Kara off on a brand new adventure. What followed was a rather enjoyable run from Marc Andreyko as he took Kara through space, only to be ended prematurely by a tie in. Then Andreyko started a new story with Leviathan but that was quickly ended when the book was dragged into another crossover. This book’s tie-in to that crossover was done by the current team. It wasn’t very good at all but at least they were trying to make the book good despite having almost no creative freedom when it comes to the character. Following all of this, the book went digital only and announced it’s upcoming cancellation. The previous issues was one of the worst comic issues that I’ve ever seen. Now, we stand at the end of it all seeing where we leave Kara until another series inevitably pops up. Let’s jump in and see where it leads us.

Final Fantasy XIV: Shadowbringers Rev…
Sanchez, Baraka, You and Me in the Ag…
The Years
Ears the News: December 8, 2017 Editi…
5 Tips for the New Real Estate Invest…
Our issue picks up where it left off with the United States General facing off with Supergirl after capturing Krypto. Kara doesn’t flinch though as she quickly uses her eye lasers in order to strike the General’s hand and free Krypto. After rescuing her dog, Kara confronts the General but her image quickly changes into that of Zor-El. Kara’s hallucinations are getting stronger as she is still dealing with recent events. Kara avoids the attacks of Zor-El and before long the hallucination fades and she once again sees the General in her true form. In general (lol puns), the General isn’t much of a threat to Supergirl as Krypto is easily able to fly around a building and knock her aside from behind. Krypto and Supergirl stand together to face their enemy but once again Kara is haunted by her hallucinations and from the rubble climbs out Rogol Zaar. A battle ensues and Kara is unable to land a blow but has been able to avoid Zaar’s attacks as well. Just at that moment, Krypto barks at her and Kara is knocked down by a kryptonite blast. Kara realizes that her hallucinations aren’t just replacing her, but rather sometimes they are completely misleading her, causing her to leave herself open to attack. 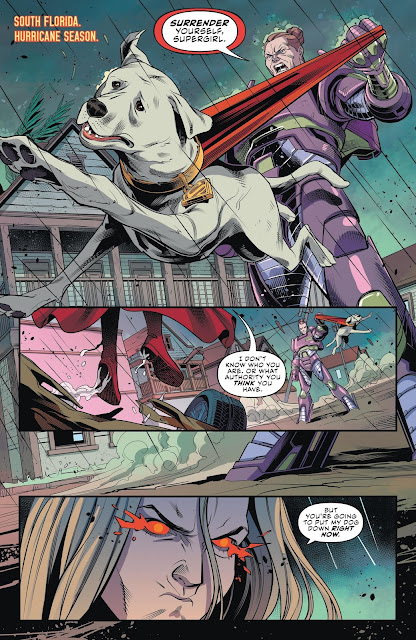 This time her hallucination changes the General into Director Bones and Kara realize she needs to find a way to distinguish the hallucinations that replace the General and the hallucinations that are simply ghosts. After chucking the General into the air, her hallucination changes into Starshame but Kara is able to see through to the truth and sees that this hallucination is simply a ghost and isn’t the General. At that moment, Kara’s evil self which was created by The Batman Who Laughs appears behind her and she quickly leaps into action. This time, Kara is able to grab a hold and finds that this enemy is a real one and the audience is shown that she has gotten her hands on the General. Kara begins flying the General up and then flies her off to another location in an attempt to changer the General’s mind. Kara brings her to an abandoned building but is able to show her that it is not abandoned at all but rather filled with people who weren’t able to evacuate. The building is starting to collapse and Kara reveals that she wants to help those people but because of her altercation with the General, she hasn’t been able to. 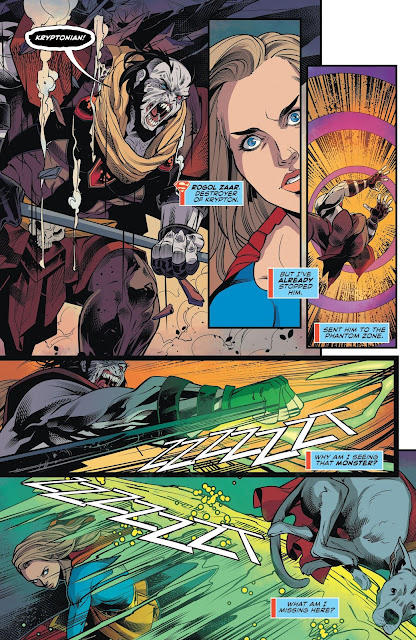 The General comes to her senses and allows Kara to aid the people. Kara leads them all out onto the nearby bridge and then turns to the General and reveals that she will have to destroy the bridge in order to get all the people to safety. The General allows this and Kara lifts up the bridge which allows the people to flee from a higher floor without injuring themselves. Kara takes the people to a local shelter with The General but despite all these good deeds, The General attempts to place Kara under arrest. The American military surrounds her but the people that Kara has just saved jump to her aid. They all begin protesting the arrest and eventually all gather around Kara to protect her. Kara flies away when she gets the chance and we get her final monologue as she states that while she is not of Earth, she has chosen to stay here and wants to protect it. She has plenty of work to do. This is where the issue leaves us.
So I want to start off by saying that this was much better than the previous issue. The story is pretty cohesive (albeit a bit cliche) and there aren’t any really weird facial expressions in this issue like there were in the previous one. So overall a great improvement upon that issue. That being said, the story isn’t what I would call good. Kara hallucinating her old foes is nice but really hits the point home that this General character is in no way interesting. In addition, they try to make this moment where Kara saves everyone by destroying a bridge but I’m really confused as to why she had to do that. They don’t really delve into it but I would assume a rather large storage container would have done the same trick without the destruction but that’s just me. In the end, Kara is still facing arrest. I don’t think that’s the worst thing because it makes sense but again, the General character is so underdeveloped that almost nothing that she does is intriguing or compelling. I want to give credit for not ending this book with the same trash fire that the previous issue was, but it wasn’t exactly a great end either. Hopefully, in a few years, Supergirl will return and we will see a new creative team that will actually make a great comic for her.
Bits and Pieces
This story wants to make a statement about something but each set piece flies by so quickly that none of them have the time to develop. That’s not surprising considering it is a final issue of this series, but it is still a problem nonetheless. The “villain” is completely inconsequential to the story itself and is replaced more often than she appears. At least we saw significant improvement in comparison to the previous issue but I wouldn’t consider this to have been a great end. This book was a mess and I hope that when it is eventually revived, that the book is given a creative team and enough separation from crossovers to really do the character justice.
4.0/10