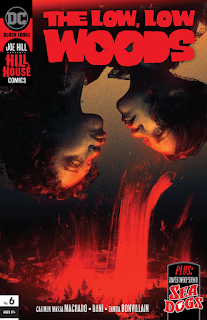 In Your House: Beware of Dog
India can be the epicentre of global …
Balloch O’ Dee Campsite
Cat Coronavirus Diary – Day 2
Older adults (60plus) lockdown home w…
Another Hill House series concludes, but will things be tied up or even fully explained?

El and Vee head off to save Jessica at Heaven on Earth and find her by the pool, clearly having drunk some of the memory erasing water. The boys are gathered around a fire and Vee marches up to them, raging over what  they could have done to her girlfriend. Josh makes a reference to what he did to them in the movie theater and Vee just beats the crap out of him.

But then the skinless men come out of the woods. The vile men who took advantage of the women of the town using the water, cursed by the witch. They're dragging one of the Deer ladies, once one of the women who were used and now the result of the witch botching things up. They knock El down next to the Deer Lady and they head to Vee, and Vee starts defending herself by throwing bricks at them. Meanwhile, the deer lady is motioning to El, showing her the blue mushrooms nearby that make the potion to "remember what you've forgotten". So she takes one, and there's really cool one page art of hands reaching down on her head, and her body turning to popcorn, as her memories return. Now El remembers what happened to her. 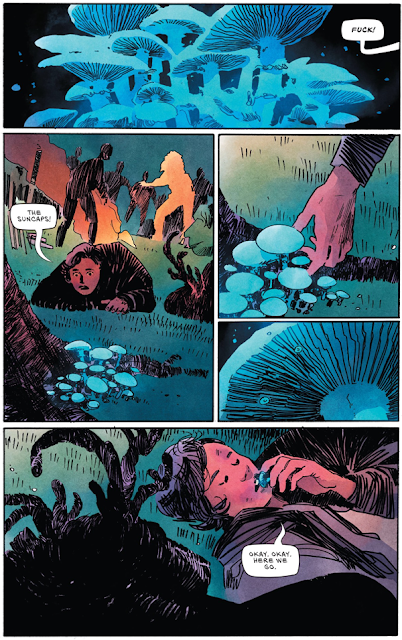 She gets up and makes Jessica eat the mushrooms, and like her mom Jessica becomes a sinkhole! The skinless men and the boys fall into the sinkhole and it closes back up, leaving them in there. Jessica returns to normal, but also now remembers what happened to her. "It isn't that  no one believed us. It's worse than that. They knew. There was talk about the missing boys. Hoe they'd been careless. The lesson was not, don't do what they did. It was don't get caught."

The girls decide to take action and help the women of the town. They make the potion and hand them out. It's each individual woman's choice whether they want to remember or not.  Even the deer lady makes a decision. But in the end, Vee also has to make the decision of whether to remember or not. 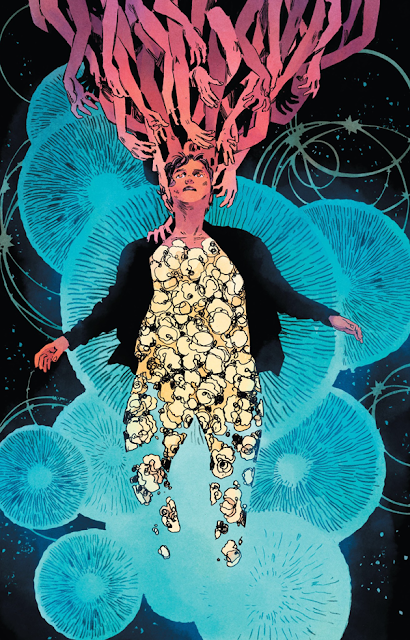 There are very specific parts of the story that are left to your imagination and honestly it's the parts that you really don't want to see. Possibly the truly horrifying things remain off-panel, and I like that. The very last page though really makes me want this to continue. I really enjoyed both of the main characters in this series and I'm sad to see it end, but man for whatever reason it feels like it was the longest running out of all of the Hill House comics. Overall The Low, Low Woods was AWESOME. And that art? Fantastic.