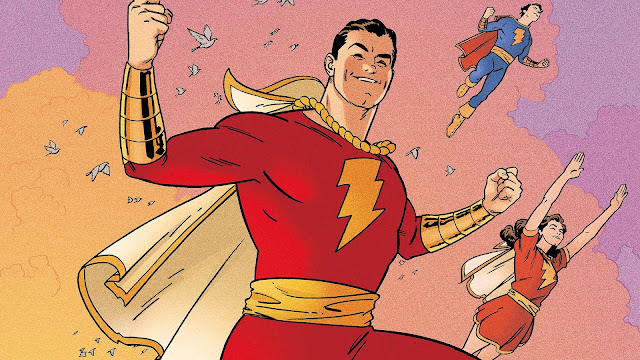 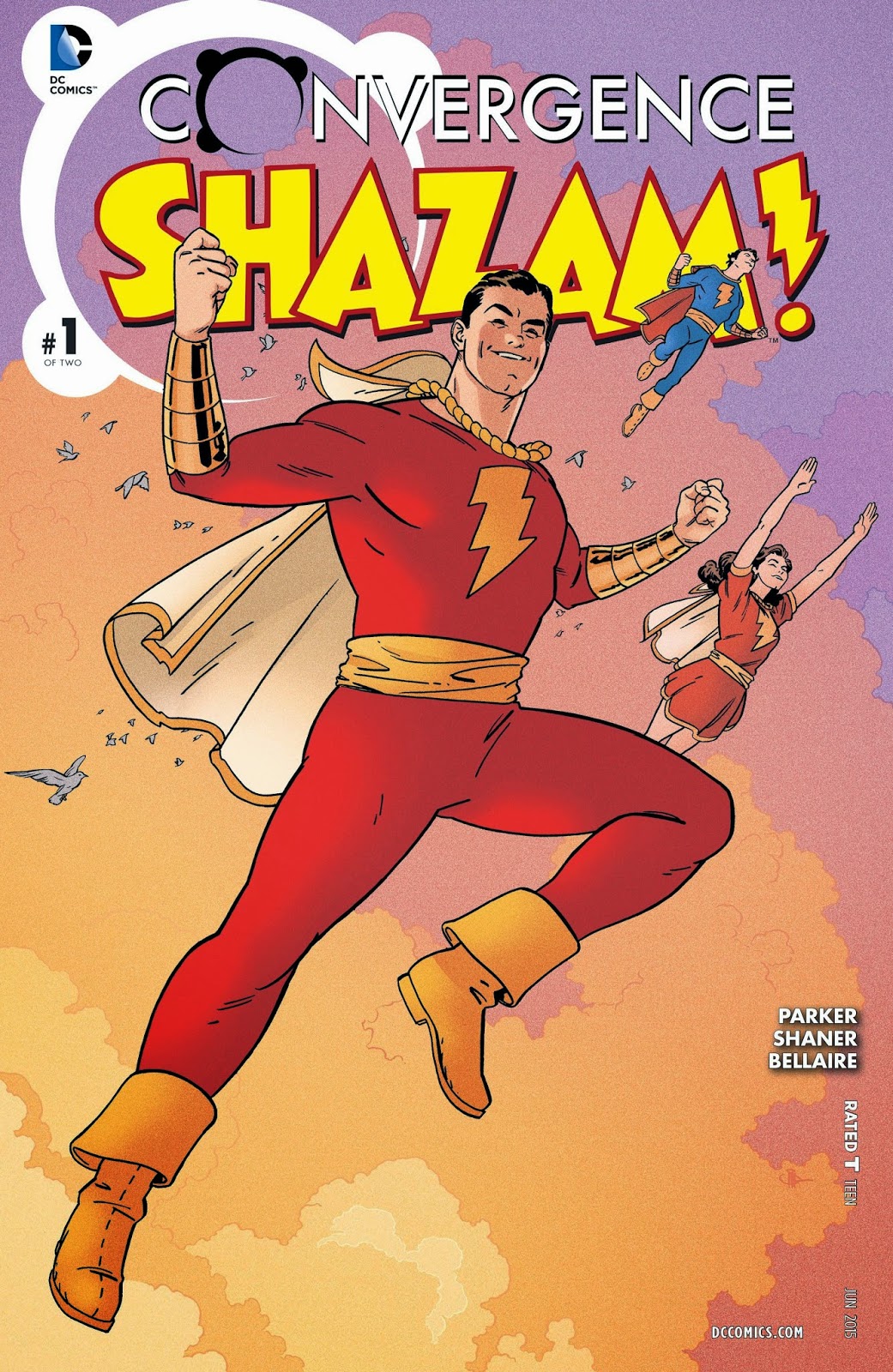 Written By: Jeff Parker
Art By: Evan "Doc" Shaner, Jordie Bellaire
Cover Price: $3.99
Release Date: April 29, 2015
*Non Spoilers and Score At The Bottom*
It's time to forget about the current Shazam with his cursing and attitude problem and go back to a simpler time.......... and being from the Philadelphia area like the current Shazam, I have to say a simpler place.  That's right, we're heading back to Fawcett City to see what Billy Batson and the rest of the Marvel Family have been up to since the Dome has taken them out of time and space and left them powerless......... Even with all of that, they're probably still doing something wholesome.  Okay, let's check back in with the Big Red Cheese and get the holy molys rolling as we dive into this issue.

How to Handle Client Complaints: The …
Why Should I Trust God Day By Day as …
MICRO BUSINESSES
4 easy yogurt meals you need for brea…
JoJo Siwa le presenta al mundo a su n…
Explain It!:
Our issue begins in a strange way.  For some reason the Fawcett City Dome gets Telos' grand speech but somehow they know that the dome dropping away is being delayed by seven hours.......... I don't get it.  Yeah, we've had some different rules throughout this first month of Convergence, like how some people are chosen and teleported to their fight to the death and others are just mewling around when all hell breaks loose in their city, but to actually have the game delayed is something exclusive to this title alone........... Man, I hope that this hasn't happened in a book I haven't read yet this week.  If that's the case, disregard everything you just read.  So yeah, that's going on and while the city panics at the possibilities of what lies ahead, Billy Batson continues to convey hope to a fearful city with his radio broadcasts and later during at press conference about what the city is going to do when the dome vanishes......... and surprisingly, it seems like the speech worked, even after a reporter threatens to blow himself and everyone else around him up as a way to express him being the master of his own fate..... Yeah, Bulletman and Bulletgirl arrived and got the guy far enough away where he didn't hurt anyone else............ But a dude just blew up in front of a shit ton of people and the simple words that everything will be alright from a boy is enough to keep these people calm......... We all have a lot to learn from Fawcett City........... Especially Baltimore. 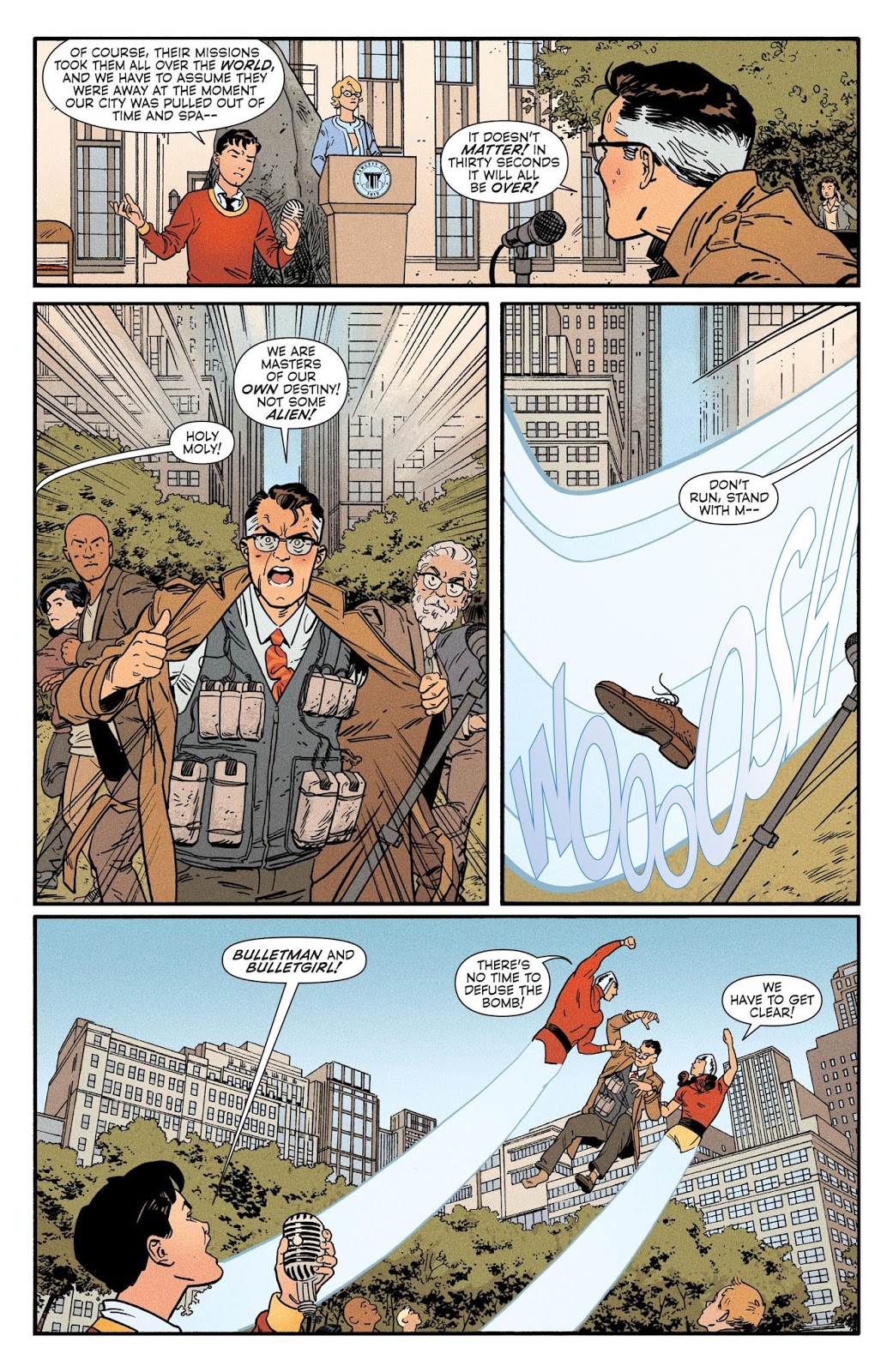 After the almost mass murder, Billy and Mary see Uncle Dudley and Sterling Morris having a secret discussion and because the both of them have been acting odd lately, they decide to get Freddie involved and follow the two.  After watching them enter a building, our trio of young heroes follow, but find themselves confronted by a reconstructed Mr. Atom and King Kull.  That's not all, it seems like the Monster Society of Evil is getting the band back together because Sterling Morris and Uncle Dudley are really Ibac and Dr. Sivana trapped in these weak old forms.  Not that Dr. Sivana is an Adonis or anything but I wouldn't want to look like Uncle Dudley either.  So our Marvel Family are trapped and if it wasn't for Tawny The Tiger showing up and the dome dropping, it looks like the Monster Society might have actually won. 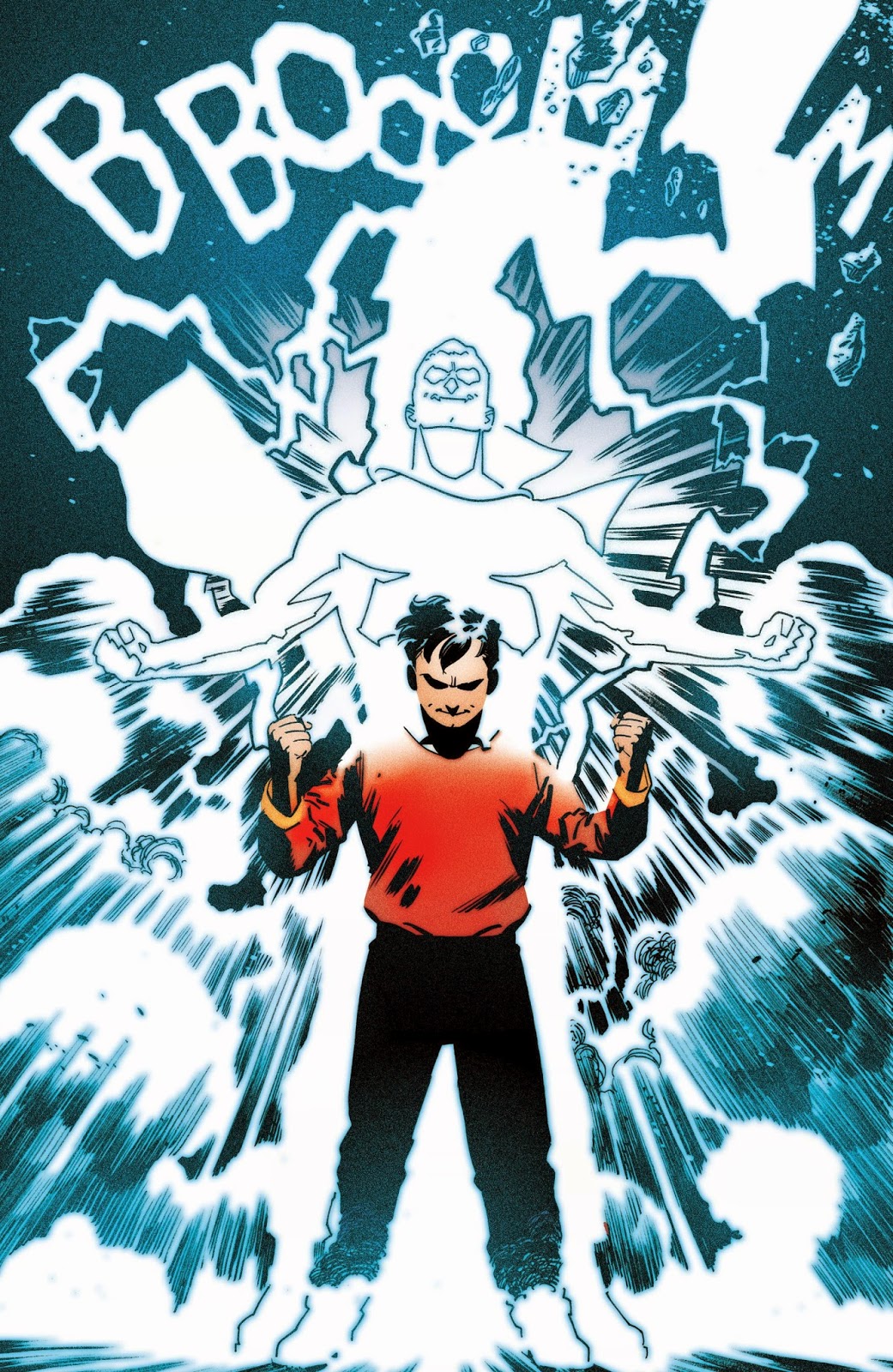 In the end, the dome comes down and our heroes get the power of their magic words back and a battle commences that literally brings the house down.  The Monster Society is defeated and as the sun shines down on our heroes, they realize that while they were fighting the Society, the battle for Fawcett City had commenced and it's feeling the full might of Gotham By Gaslight.  Calling a bit of lightning down should make short work of the zeppelins, but I guess we're going to have to wait for the next issue to see what Captain Marvel does. 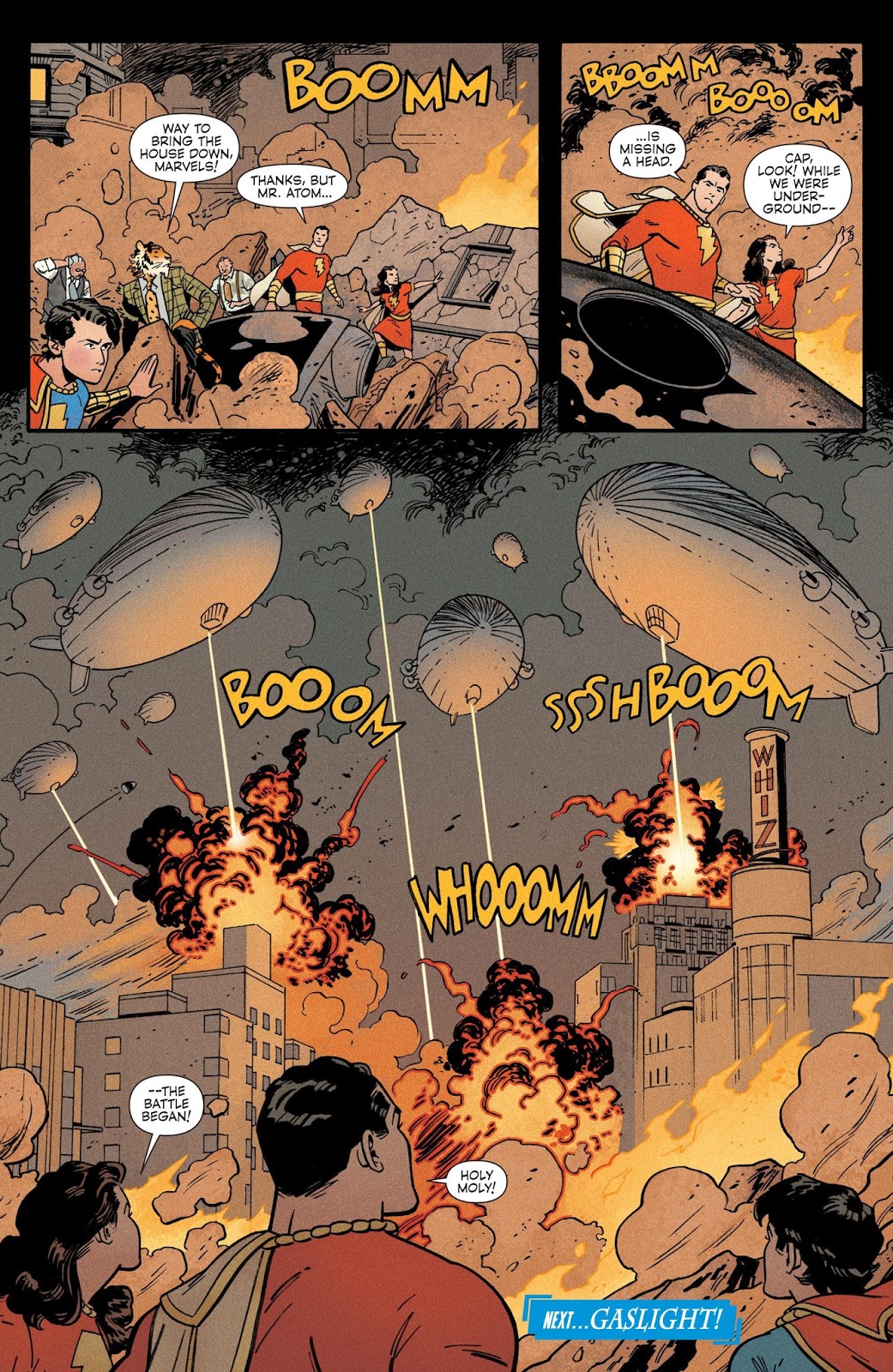 That's it for this issue of Convergence: Shazam! and while I was really looking forward to this since it was originally announced.......... I guess I wasn't prepared for how "Shazam!" it would actually be.  I know that sounds dumb with this being a story from the days of Captain Marvel being a wholesome, holy moly spouting kid who was known as "The Big Red Cheese", but it just wasn't what I'm used to in reading modern comics.  Now that kind of story might be just what you're looking for and if that's the case then you'll probably love this.  To me, it was a really well done period piece that shows just how much comics have matured over the decades and the art here fits the period really well.
Bits and Pieces:
This issue really has all the hallmarks of superheroes from yesteryear and if you're looking for mad scientists, over the top schemes, and the days where black and white were all there were with no grey area in between, then this is the issue you've been waiting for.  As much as I like the character of Captain Marvel, this issue to me was just a little too much of the comic tropes that I've grown out of and while I still enjoy it as a look back at what comics used to be, I think that this comic isn't for everybody.
7/10