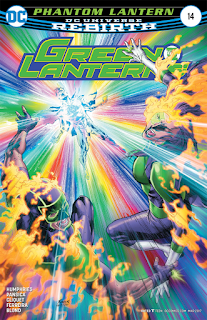 After taking a few weeks off from this for the holidays, I'm finally wrapping up my Rebirth Rewind reviews of the Green Lanterns "Phantom Lantern" arc. It could be my last weekend "retro review" for awhile now because I'm going to be putting a lot of focus on getting stuff done around the house on weekend nights. We moved into this house just about a month after this issue was released and two months before our youngest kid was born. That's three years. Three years and we still haven't gotten around to a lot of the "settling in" stuff, and I intend to do just that after the rascals are finally sleeping.

So, sorry Jim and the GFC, but I might be suspending the retro reviews until the Hill House books are over. But who knows? I could find myself with the time to sneak them in anyways. Now with that out of the way... let's proceed!

Use the "Phantom Lantern" label to read my other reviews from this arc.

We've seen Frank use every light from the emotional spectrum except one. It's the one that, as a complete sociopath, he rarely ever feels. But at the end of the last episode when Simon and Jessica actually try to help him instead of defeat him, he suddenly feels compassion and turns indigo. 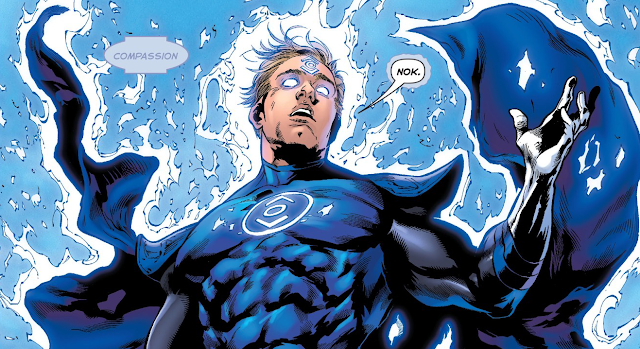 Meanwhile, back at Frank's apartment, Volthoom continues to attempt the "Malthusian transfer" while Rami fights back. The banter back and forth about their history, which you learn more about after this arc is over. 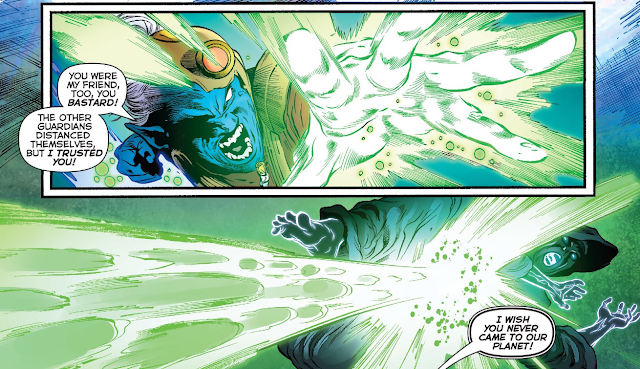 And back at the park, Frank is getting pretty emotional.

He feels sorry for what he did to Nazir. He realizes that he's been a terrible son to his parents and a terrible brother to his siblings. And then he warns the Lanterns that Volthoom has Rami. 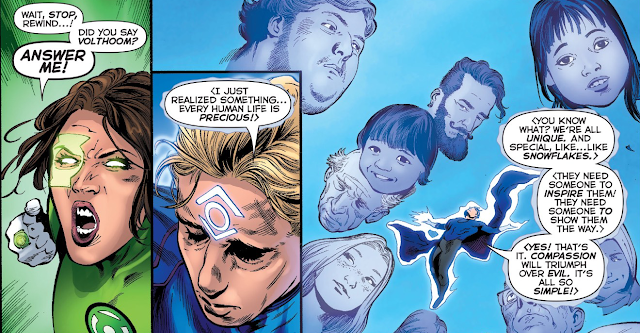 He swears that he will be the hero for the people of the world, but then he breaks down. He asks the Lanterns to forgive him because all he wanted was to be a hero and he had forgotten what being a hero was about: helping people. But instead he just put people in danger. 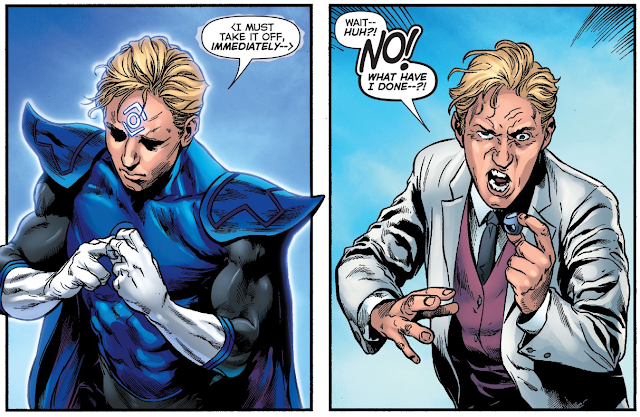 Simon gives him a good clean body check and knocks the ring out of his hands, causing it to bounce away. 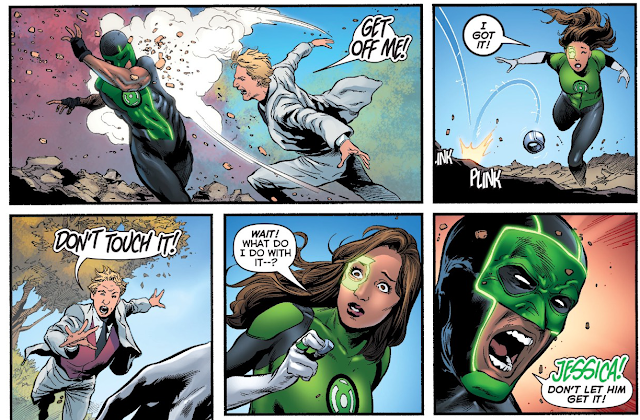 Because she doesn't want to hurt Frank but she doesn't want him to get it back, she puts the Phantom Ring on and wonders... what will it do to her? What will the "default setting" be when she puts it on? Should she be wielding a Sinestro Corps ring instead? 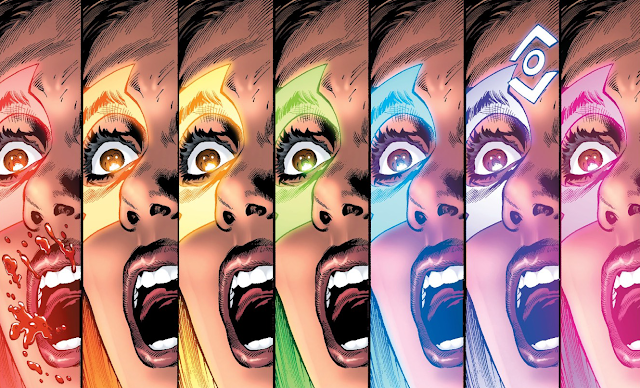 NOPE! Jessica is a Green Lantern through and through! 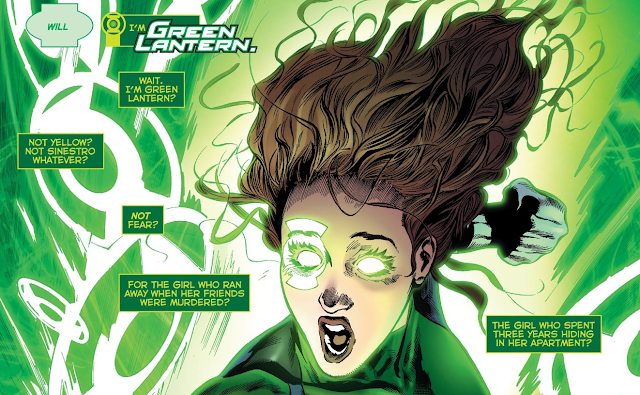 Frank charges her to get his ring back. 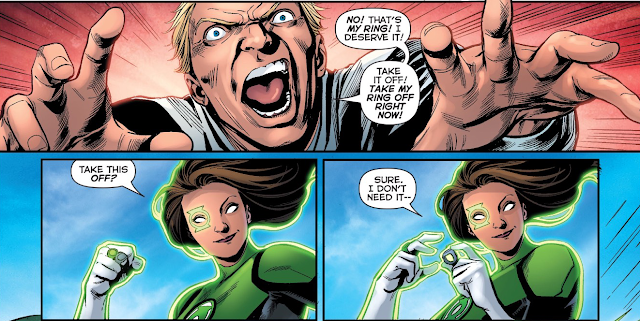 But seeing that she deserves a Green Lantern ring makes her willpower stronger and more inspired than ever before, and she's finally able to make a construct! Which she uses to constrain Frank, of course. But Simon now holds the ring and contemplates putting in on himself. 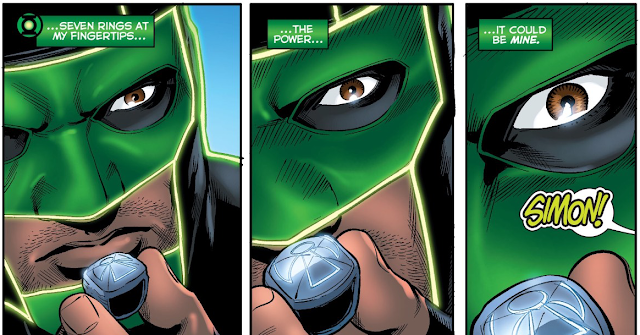 And Jessica is so excited that she's finally making and controlling constructs that he snaps out of it. 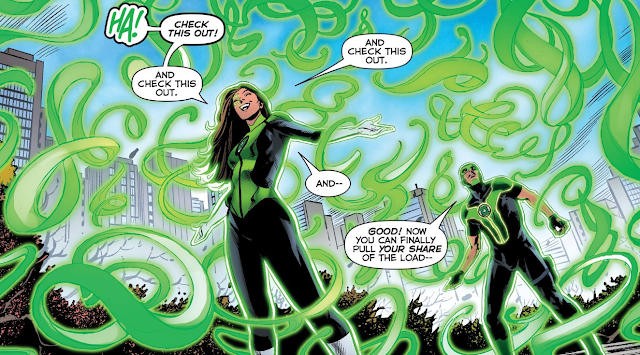 Finally responding to the call for help that Simon and Jess sent to the Corps, Vath Sarn and Isamot Kol show up and demand to know what's happening.

Simon begins to tell them about it, and they've never heard of the Phantom Ring. They're kinda peeved that they had to fly light years for this crap. Then Rami shows up out of nowhere! 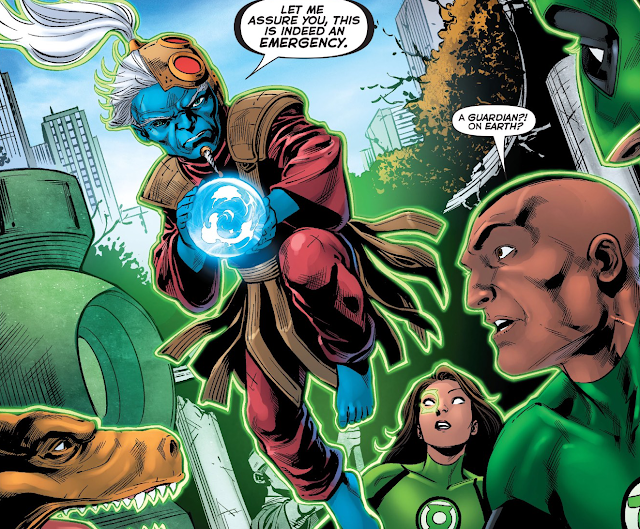 He explains that Volthoom has been vanquished into that orb that he's holding and gives a better explanation of what was going on than Simon did. Vath Sarn and Isamot Kol tell Rami that he's coming with them to Mogo to speak to John Stewart, but Rami refuses. He's staying with the Green Lanterns of Earth.

Meanwhile, Frank is squirming and screaming and trying to break free from Jess's construct. 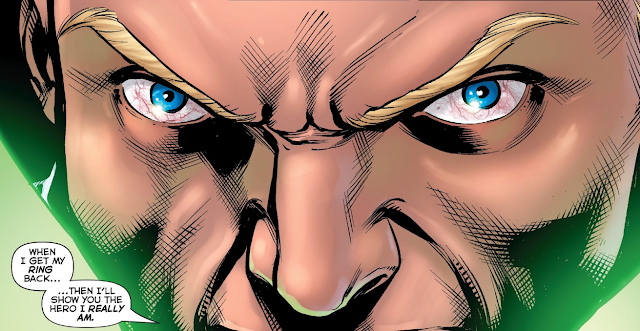 Looks like it's prison for Frank, though. Simon calls Cyborg to get his cell ready in the Watchtower.

And that "Malthusian transfer" that Volthoom was trying to do to Rami? It worked. 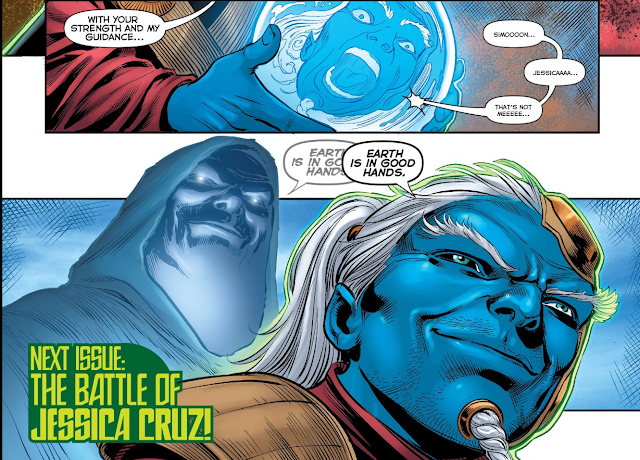 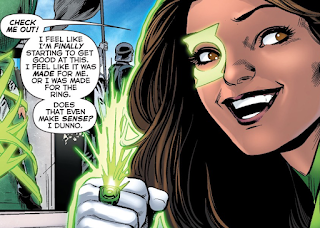 With excellent art and a bunch of great moments, this was a really fun issue to read. Frank finally meets his greatest enemy: actually thinking about other people and caring about them, and feeling sorry for what he's done (remember that he's so selfish that he ditched his girlfriend so he could work harder at earning a power ring).

The evolution of Jessica was hands down the best thing about this title run, and this is the issue where she finally realizes that being a Green Lantern is her calling and she uses that to boost her confidence and finally make and control constructs. How could that not make you happy?