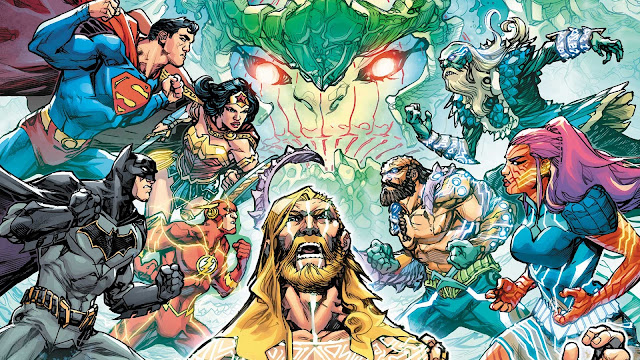 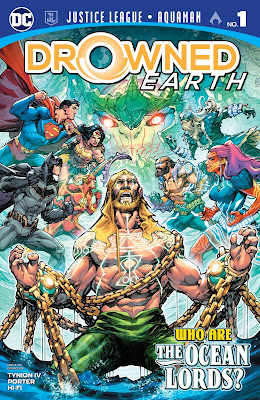 Coach Depression sent in the play, wh…
Cryptoqueen Vanishes Leaving A Pitch …
5 Ways To Share Your Skills With Othe…
Philip La Bossiere Interior Designer
BRIEF BUT SPECTACULAR - Photographer …
Group Editor: Marie Javins
Cover Price: $4.99
On Sale Date: October 31, 2018
**NON SPOILERS AND SCORE AT THE BOTTOM**
Wait, this is where the story begins? Then what happened in Aquaman and Justice League last week? Not to mention Titans, and whatever other books got caught up in this event already. Looks like this is going to be the yarn for the long haul, so let’s just settle right into what we’re told is the opening salvo to “Drowned Earth,” Justice League/Aquaman #1, which I’ve reviewed right here!
Explain It!
Right, so the stuff we read about last week, it still applies: three otherworldly water gods are flooding planet Earth with their magic water that turns everyone it touches into violent, slavering beasts. They’ve got Aquaman in their clutches, essentially to taunt him with the horrors being visited on his world and inherited the nation of Atlantis. Or is it the City of Atlantis? I thought it was a continent? Anyway, he gets told by the water gods that they’re heaving revenge on planet Earth because Poseidon locked them out ages ago, and now the oceans on their worlds dried up or something? Point is, this is all because of Poseidon, who Aquaman thought was some hot shit, from his vantage point. 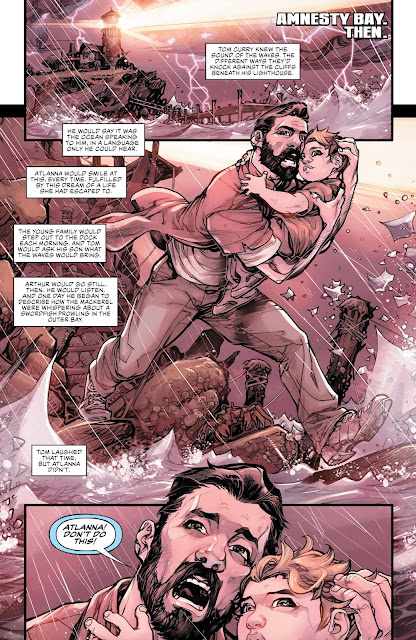 Still holed up in the Hall of Justice, Batman watches the world become subsumed by agua on his many screens, and uses Miss Martian to keep in contact with folks like Martian Manhunter is, I dunno, on vacation or something. I liked seeing Megan being used in a “prime-time” title, I know she’s been on the Teen Titans but it feels more permanent to see her featured here. She does a great job, so Batman tells her to scram via teleporter because the Hall of Justice isn’t going to stay watertight forever. She tells him to clam up, cripple, and Batman is forced to accept her help whether he likes it or not because she’s a stalwart, dependable young woman aaaand she was tricked into teleporting away by Batman. It’s not like there’s a lot of places she can be aside from the satellite—a look around the world shows that it’s fairly well been conquered by Flood! 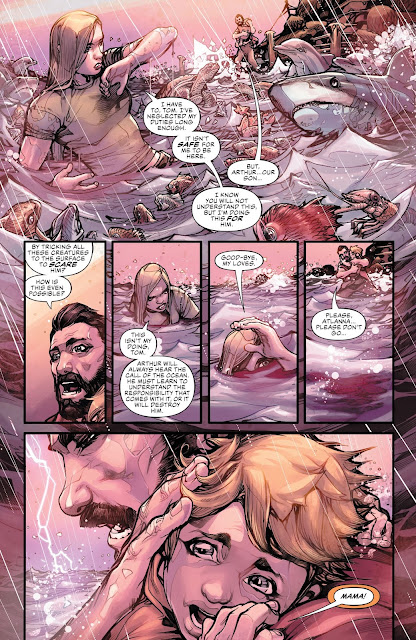 That’s the name of the creature created by the water gods to do the actual flooding of the planet. Superman and the Flash try knocking it out, but they fail, and indeed the Flash needs to rush Superman back to shore before he gets touched by mutating water. Meanwhile, in that alternate dimension, it turns out that the super soakers have been in league with Black Manta all along! He traded…I’m not sure what. But what he got in return! I’m not sure about that, either. Looks like he gets Aquaman’s fish-talking power? That’s nice. Our heroes are really on the ropes, but of course, they still have an ace up their sleeve: Wonder Woman! Who I thought was already on the table, but I guess she’s the only one that can save us now. 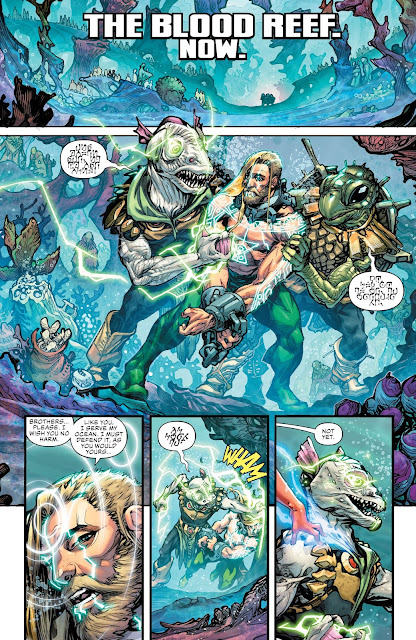 Also, Mera got a thing from the museum of Atlantis, as directed by her brother-in-law Orm, that will do…something. There are a lot of something happening here, but I’m not sure which ones of them matter, or if any of them will matter against an Extinction Level Event such as this one. The particulars are simply unclear, and we’re left with a handful of potential MacGuffins to hang our hats on. I like some of the concepts being presented, but the names of the “Ocean Lords” are too silly to be repeated, and I have to wonder why there’s so many of them. Wouldn’t one super-mean one suffice? I’m betting they’ll need to be fought on several fronts by the end. Oh well, could do worse than this. But I wouldn’t want to read that, either. 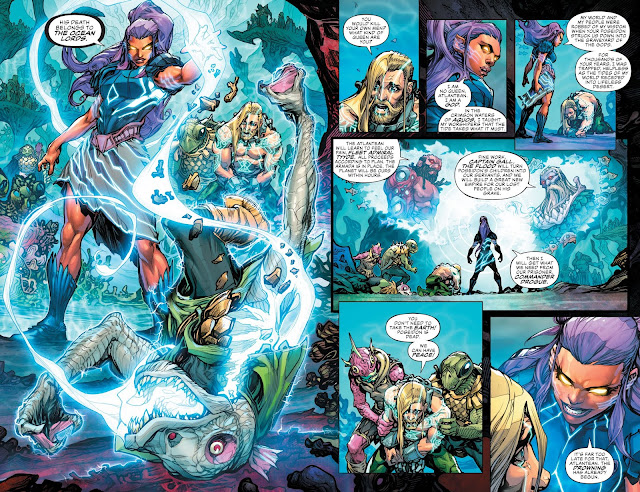 Bits and Pieces:
For those that missed Justice League or Aquaman last week, you're in luck: this issue recaps everything. There's some story advancement, but nothing substantial that increases or decreases the stakes. From my standpoint, the world is just screwed.
6/10