The Terrifics Annual #1 Review and **SPOILERS** 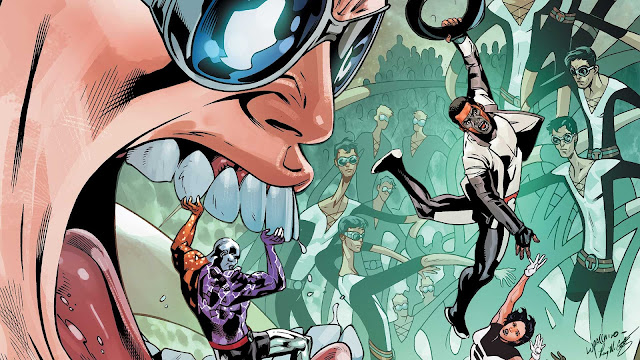 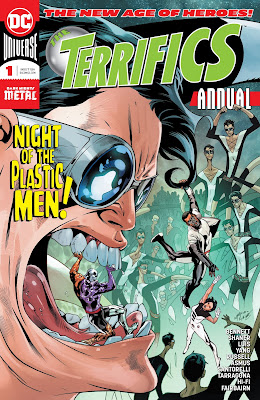 ‘The Angry Cabbage’. A Vegetable Rese…
Merry Christmas and Mahatma Gandhi
Why Friday The 13th Will Be Your Luck…
BuzzFeed Editor, Lara Parker, Uses Ca…
The 10 Leading Blockchain Companies o…
Letters: Tom Napolitano
Cover: Emanuela Lupacchino, Ray McCarthy, and Romulo Fajardo Jr.
Assistant Editor: Andrew Marino
Editor: Paul Kaminski
Group Editor: Marie Javins
Cover Price: $4.99
On Sale Date: October 31, 2018
**NON SPOILERS AND SCORE AT THE BOTTOM**
Other New Age of Heroes titles have gotten Annuals, so I suppose it’s not a crime for The Terrifics to have theirs. Mind you, this one contains three stories: one at the normal comic book length of 20 pages, then two that come out to 20 pages. So I have that to deal with. Well, no sense hemming and hawing over it, nothing to do but get to my review of The Terrifics Annual #1, which has been posted below for your convenience!
Explain It!
In our opening Story, “The Masquerade,” Simon Stagg has employed someone to create duplicates of Plastic Man for military purposes, using some genetic materials stolen from Plas himself, plus an augmented T-Sphere. Instead, he creates a bunch of “blanks,” clones that can assume the identities of others, who they then stuff in a cocoon and stash away for freshness. Of course, these blanks escape, and just that very night Stagg Industries is hosting a masquerade party for their interns. Turns out a bunch of folks at the event are clones, so the Terrifics move to nullify them, including love interests for Phantom Girl and Mr. Terrific. And the guy P.G. liked was a clone of Plastic Man’s son, Luke? I didn’t really get all of that mess. 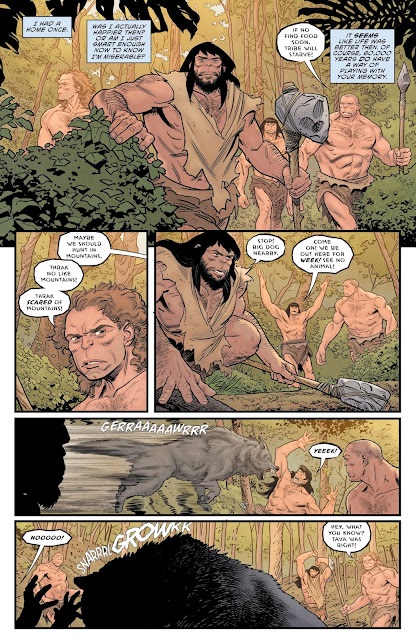 The second story centers around the history of Java, and why he decided to become the tormenting Doctor Dread. Seems he was the big cheese of his Neanderthal camp, but when Cro-Magnon man started lingering nearby, Java and his tribe were outclassed. They had to move northward, into hostile, frozen territory, and to save his wife from a pack of wolves, Java broke the ice over a lake and submerged the pack and himself, a supreme sacrifice. That sacrifice was negated eons later, when he was revived by Stagg Industries and made to be a veritable slave. Separated from his humanity, Java has become…well, uh, a parody of Doctor Doom. 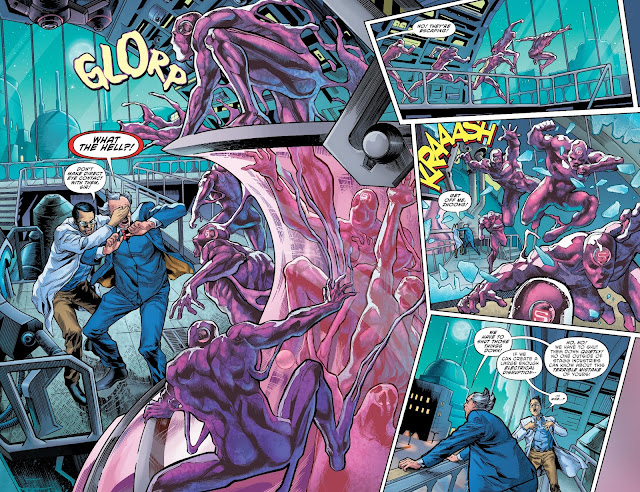 The third story is about how Tom Strong got his distress call onto the carcass of the giant being, that thing we saw in the first two issues. This story turns out to be a little overly-complicated, involving some kind of energy extraction from the kaiju, and the ability to breach dimensions…this was the weakest story of the three, for sure. 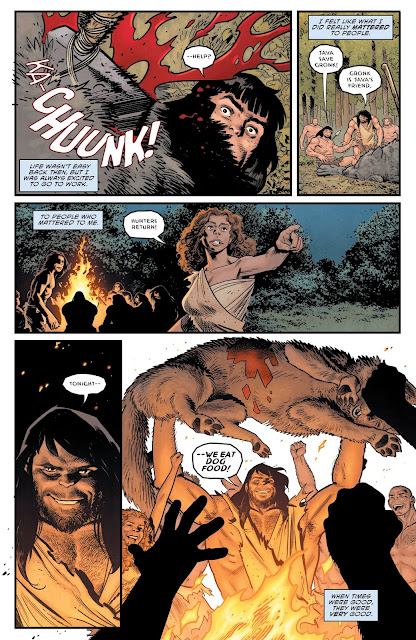 Normally, I might have given each of these stories their own score—and I suppose I should, really. I want to take this issue as a whole, however, because that’s how I would take it as a reader. They are all about the same team, after all. The third story is very weak and doesn’t really make a lot of horse sense. The first story is alright, though it goes on a little bit longer than I’d like. The middle story is decent, but also about two pages too long for my tastes. This issue was still a lot more sustentative, in terms of developing characters and establishing the status quo. I think I am just past the point of getting excited for this series. It’s been wandering in the woods for far too long. 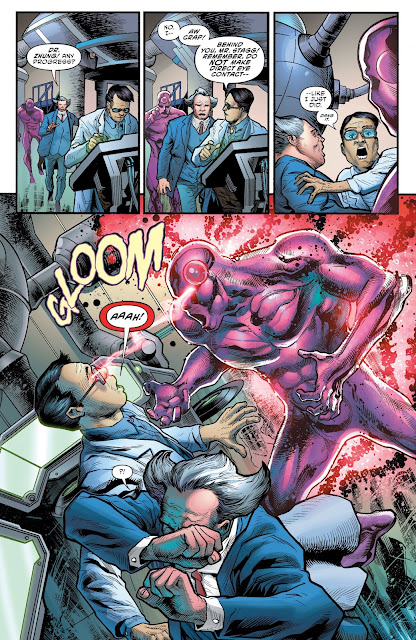 Bits and Pieces:
Three disparate stories of varying quality, each filling in some of what's been missing from the series. What would you call it? Color? Essence? Gravitas? Whatever it is, this issue adds a little more of that, but not enough to justify plunking down five bucks. Not by a long shot.
6/10

The Terrifics Annual #1 Review and **SPOILERS**