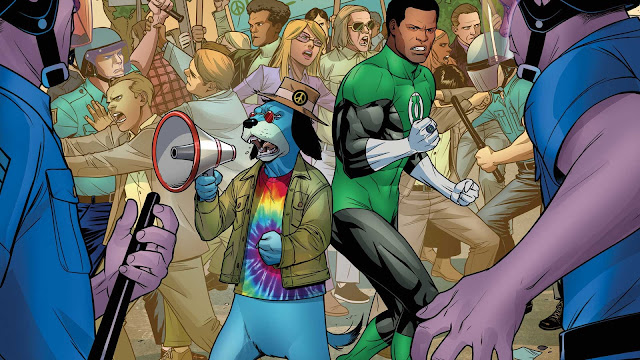 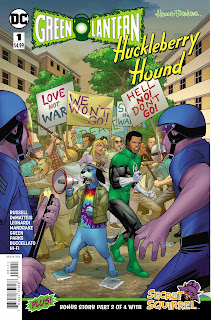 Inside the Sky Residences at W Aspen …
Sandboarding In Peru At The Huacachin…
Robot Lawn Mower – This One Is As Sty…
OPINION - Shields and Brooks 8/30/201…
Long Island Sounds July 2019
Let me start this off with a warning. I thought that this was going to be a ridiculous book. What I found was one that faces several very real problems in America today, as it was when this issue takes place (1972), and it focuses on one very polarizing... uh... "political" issue in particular. If you're boycotting Nike then you're not going to like this because it's clearly making a statement that you're not going to agree with.
We start off with Jon Stewart being trained on a distant planet by fellow Green Lantern Katma. After a brief lesson she instructs him to go back home to Earth for his next test... but the catch is that he can't use his ring.
On Earth, we see that the year is 1972 and Jon is in some random city. He leaves a meeting of a group of fellow veterans to go see Huckleberry Hound, who used to have a television show but is now a stand-up comedian. A not very funny one, at that. After the set, Jon introduces himself to Huckleberry at the bar and he tells him how much his television show meant to him as a kid. 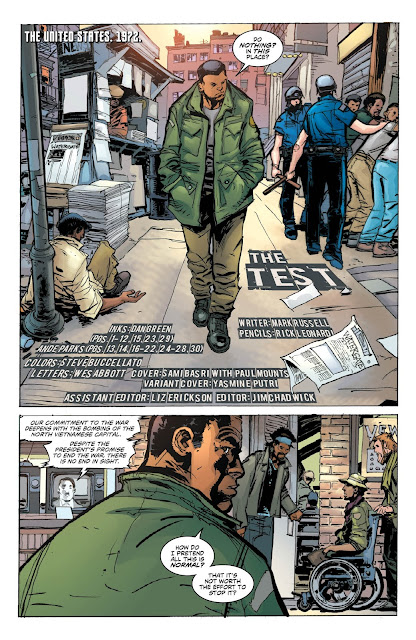 They go over each other's stories. Jon was an architect student before he went off to Vietnam and his brother, who earned two Purple Hearts and a Bronze Star, had finally come back home from the war. That very night Bbq Betty called the cops on their celebration and it turned into a riot, incited by crooked cops, in which his brother was killed. Jon was drafted soon after. Huckleberry then talks about growing up poor in Mississippi, how most of them were as angry as they were poor, and he didn't understand why they blamed the one group of people even poorer than they were. The flashback images show that these neighborhood people were also Klansmen.
And then, right outside the club, another BBQ Betty calls the police on a group of black men just hanging out. Again, it's not the good officers that show up but the jerkface ones, so they start bullying and arresting the civilians for no reason. When the two new friends see this happen, they run out of the club to try and quell the incident. When Huck has a gun pulled out on him for assaulting an officer of the law (bad dog!),  Jon finally uses his ring to contain all of the officers and help the civilians escape. 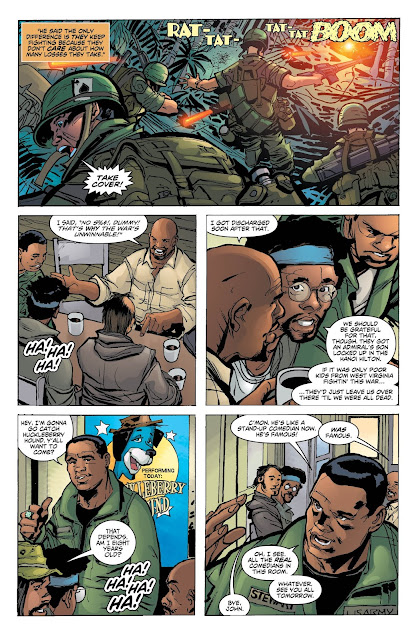 In the final pages, Katma visits Jon, who thinks he failed her and tries to turn in his ring. She explains to him that the test wasn't to see if he could follow the rules but to see if he knew when to disobey. "Knowing when to disobey is the most important skill of a Green Lantern. Maybe the most important skill of being a human being." I'm just gonna go ahead and mention eating at a diner, sitting on a bus, and kneeling on a field right here.
The art was okay I guess, but the story makes the book. This is clearly making a statement about events today by using a different era famous for the same issues. Namely, the treatment of veterans and police brutality towards African Americans. And because the latter is such a dividing topic, it's definitely a tough read for anybody; whether you realize these things happen or deny it. This issue disobeys, and I like things that know when to disobey.
Bits and Pieces:
But enough of that... Why the heck is Huckleberry Hound even in this??? If this was an annual with his part being replaced by some random washed-up star that they made up for just one issue then I'd probably give it an 8. Instead, they made this a crossover with a headlining Hanna Barbera co-star... who basically did nothing. There was no point in having this specifically feature Huckleberry Hound. For that, I'm taking a point off.
7.0/10

17 Things to Write About For Your Next Nonfiction Book