When the Man comes around


This fourth issue of No. 1 with a Bullet works well, in no small part due to the solid groundwork laid down in the first three issues. This time around I found myself increasingly curious about the final direction of the story, and it threw a few curve balls my way. Let's see what it was all about... 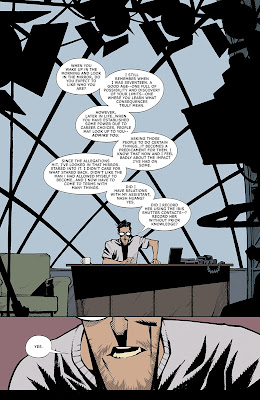 The issue opens with a monologue from Jad (see above) who seems to be on the verge of confessing to recording the sex tape featuring him and Nash (recorded without her consent). We then cut to Nash and, if it wasn't clear before now, we really get to see how the ordeal she has been through since the leak of the tape has affected her. 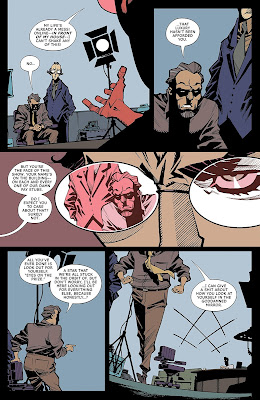 This book has an interesting take on the aftermath of those events. Jad seems to be behaving with remorse but is it more self pity? Is his sentiment based on a reaction to the storm surrounding Nash? Or the impact on his career? Meanwhile the interesting, or rather disturbing, quality to Nash's situation is the sheer mind-shattering impact that the exposure has had on her daily existence. This issue doesn't resolve her issues but it does a fantastic job of highlighting them. 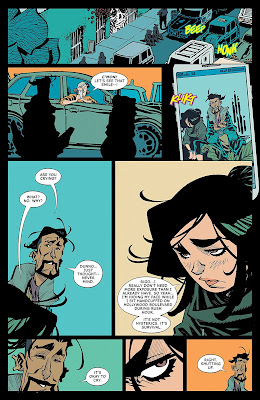 The art in the book continues to be of a high standard, and its worth mentioning the key strength that this book deploys in its layouts. One page in particular in this issue (but this has also been a feature of other issues) shows the cumulative build up of social media commentary. It shows a montage-blur of social media perspectives and people taking sides and passing comment on issues personal to Nash and Jad. Everyone has an opinion and the book expertly draws out what it must be like for Nash to be caught in the eye of that media storm.

Another fine issue of a series that is fast proving to have an original voice, and which has found an original way to depict contemporary social issues and concerns. In fact it's hard to think of a book that taps into contemporary issues around gender roles and perspective as well as this one. Another strong installment.