I Scream, You Scream, we all scream for ice cream!


Maybe its just me but I feel about Ice Cream men the way other people feel about killer clowns. Always something sinister about those weird dudes in their colorful little vans with their muzak tunes playing over a crappy PA system. Plus in my home city, Ice Cream Men usually find a profitable sideline in selling low-level drugs and stolen cartons of cigarettes. I remember seeing another adult going up to an Ice Cream van in our street and asking for two ice creams and laughing quietly to myself at the Ice Cream man's surprised face - "you want to actually buy an ice cream?". Anyway, I'm sure some are legit.  Enough of this account of my life in the gritty streets lets see how this book was! Yay! 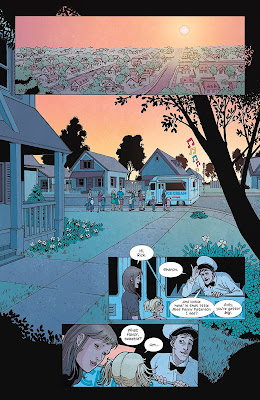 Well holy hell, this was a creepy book. I opened it up and expected this sinister-ass looking Ice Cream man to be the bad guy. Well, within the first few pages I was more worried about his weird little kid customer as he walks home feeding his face with double chocolate ice cream, before revealing his pet spider - totally venomous and lethal. Of course, the little freak already knows that because the spider killed his mom and pops about a week ago and this kid's been living off ice cream since then and living in the house with a clothes peg on his nose. Little Freak. 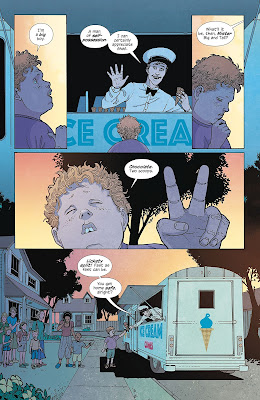 Then shit gets weirder. We cut to some cops who have been asked to go and investigate why spider-kid's parents have gone MIA. Then we cut back to the little spider-kid who is out for a jaunty walk in the woods near his house whistling a little tune, oblivious to his parents' decayed corpses sitting at the table back at the ranch. He then stumbles across Ice Cream man in the woods wandering about with his clothes all ripped off Bruce Banner style. Ah, yes. A wholesome tale of a 3/4 naked Ice Cream man and a little boy in the woods together. An awkward meeting enhanced by the Ice Cream man clicking his fingers to conjure up another double chocolate ice cream. Nicely handled. 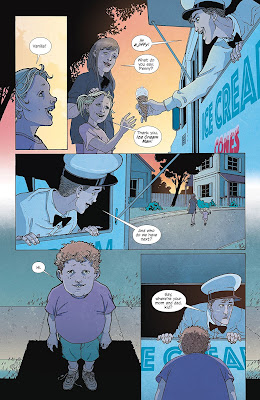 When he arrives home the cops have already entered his house and the male detective is bitten by the spider. He starts foaming at the mouth and convulsing on the floor. Spider-kid tells the (surviving) female detective that Rupert (the spider) doesn't like adults. Oh, well thanks for telling me now kid, after its bitten my partner. Anyway, afraid that the cops are going to confiscate his lethal little pet he runs out of his house into the woods again when he comes across a mad ass werewolf (who I think is the Ice Cream Man). The spider bites the feral beast and runs off. Feared missing, we see our little arachnid friend crawling up to the Ice Cream man at his van, who then turns the spider into...an ice cream! Lickety Split!

This book is crazy as hell and I thought it was great. It is creepy suburban weirdness that coasts along well and throws you off the expected path quite a few times. Well worth trying out, even if it just confirmed my feelings about Ice Cream men!